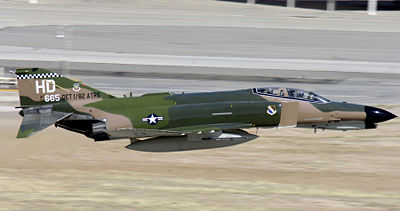 A highly successful multirole fighter, originally developed by the U.S. Navy for an interceptor role, but soon adopted by the U.S. Air Force and U.S. Marine Corps, and becoming the backbone, for many years, of the U.S. fighter force. A number of improved models were introduced during its long production run.

Crews called it the "Rhino" after its prominent and drooping nose. Less visually graceful than other fighters, it gave a sense of power and solidity.

A two-seat fighter with a pilot and weapons systems officer, it had Mach 2 speed, heavy payload, and moderate maneuverability. While a good pilot could be effective in a dogfight, early F-4 models suffered from the assumption that all air combat would use only air-to-air missiles (AAM), and the F-4B/C did not have an internal gun. The F-4 could use AIM-9 Sidewinder heat-seeking and AIM-7 Sparrow radar-guided AAMs. As an interim solution, cannon pods were mounted on wing pylons, and the F-4E and later models had an internal 20mm autocannon.

In air operations against North Vietnam, the F-4 began as the escort fighter for the Air Force and Navy, but largely replaced the F-105 as the Air Force fighter-bomber. Since the Navy had A-6 Intruder and A-4 Skyhawk bombers, the Phantom remained the dominant fighter, replacing the F-8 Crusader. Even so, Navy F-4's would do suppression of enemy air defense and other bombing missions requiring agility.

While the precise kill ratio against North Vietnamese aircraft has not been released, it is generally stated as between 2 to 3 for the Phantom against MiGs. [1] It was, however, a more expensive aircraft than its opponents, leading to John Boyd's "high-low" concept in the next fighter generation.

Early Phantoms also had the problem of engines that tended to produce excessive smoke, which could be a sign to the enemy: "target here". One of the techniques for suppressing smoke was to go very slightly into afterburner, which eliminated the smoke but increased fuel consumption. All models of the F-4 were capable of air refueling, although there were incompatible refueling systems for the Navy and the Air Force.

Later models had electronic warfare defenses including the AN/ALQ-131 radar jamming pod. The F-4G variant was optimized, in 1975, for the SEAD mission, by replacing the cannon on F-4E aircraft with AN/APR-38 radar locating receivers, and arming with the AGM-88 HARM missile. By the Gulf War, the electronics were upgraded to the AN/APR-47.

The Phantom was retired from U.S. manned service in 1996, although QF-4 supersonic target drones remain in service. Versions, some significantly upgraded to serve until 2015, serve with Egypt, Germany, Greece, Israel, Japan, South Korea, Spain and Turkey.[2]