This article is about the pseudoscientific movement called Eugenics. For the health sciences' approach to the identification of deleterious genes and chromosomal abnormalities, and how that identification is applied to patient choice in reproduction, see genetic counseling.

Page of a pamphlet describing the lectures of Albert Wiggan on Eugenics. Courtesy of the Special Collections Department, University of Iowa Libraries

Eugenics (from the Greek. eugenes "well-born, of good stock," from eu- "good" + genos "birth") is the general name for a series of ostensibly scientific claims about inheritance among humans, which sought to eliminate traits, such as "imbecility" or criminal behavior, by selective sterilization, regulation of family size, and restrictions on who could marry whom. It was based upon a number of premises since shown to be demonstrably false (not all eugenecists held to all of these uniformly):

The banner of eugenics was taken up by a variety of groups in the United States and around the world, each of which believed that it would lead to the creation of healthier, more intelligent people, conserve society's limited resources, and reduce human suffering. Of course, one of the unspoken aspects of this "reduction" in suffering was that it worked, not by reducing suffering per se, but by reducing the number of people through forced sterilization -- fewer people, ergo, less suffering. Many women were sterilized involuntarily and without their knowledge under Eugenics laws which were passed in many states of the United States throughout the nineteen-teens and twenties. 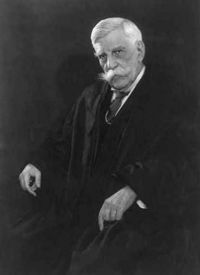 One of the earliest modern advocates of eugenic ideas (before they were labeled as such) was Alexander Graham Bell. In 1881 Bell investigated the rate of deafness on Martha's Vineyard, Massachusetts. From this he concluded that deafness was hereditary in nature and recommended a marriage prohibition against the deaf ("Memoir upon the formation of a deaf variety of the human Race") even though he was married to a deaf woman. Like many other early eugenicists, he proposed controlling immigration for the purpose of eugenics and warned that boarding schools for the deaf could possibly be considered as breeding places of a deaf human race.

In 1907, Indiana became the first of more than thirty states to adopt legislation aimed at compulsory sterilization of certain individuals.[1] Although the law was overturned by the Indiana Supreme Court in 1921,[2] the U.S. Supreme Court upheld the constitutionality of a Virginia Law allowing for the compulsory sterilization of patients of state mental institutions in 1927; it was in writing this opinion that Justice Oliver Wendell Holmes Jr. coined the phrase "three generations of imbeciles are enough."[3] 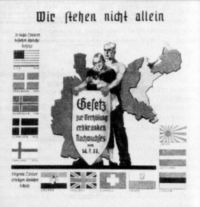 "We do not stand alone": Nazi poster from 1936 with flags of other countries with compulsory sterilization legislation.

Nazi Germany under Adolf Hitler was infamous for eugenics programs which attempted to maintain a "pure" German race through a series of programs that ran under the banner of "racial hygiene". Among other activities, the Nazis performed extensive experimentation on live human beings to test their genetic theories, ranging from simple measurement of physical characteristics to the horrific experiments carried out by Josef Mengele for Otmar von Verschuer on twins in the concentration camps. During the 1930s and 1940s, the Nazi regime forcibly sterilized hundreds of thousands of people whom they viewed as mentally and physically "unfit", an estimated 400,000 between 1934 and 1937. The scale of the Nazi program prompted American eugenics advocates to seek an expansion of their program, with one complaining that "the Germans are beating us at our own game".[4] The Nazis went further, however, killing tens of thousands of the institutionalized disabled through compulsory "euthanasia" programs.[5]

They also implemented a number of "positive" eugenics policies, giving awards to "Aryan" women who had large numbers of children and encouraged a service in which "racially pure" single women could deliver illegitimate children. Allegations that such women were also impregnated by SS officers in the Lebensborn are common, but unproven. Also, "racially valuable" children from occupied countries were forcibly removed from their parents and adopted by German people. Many of their concerns for eugenics and racial hygiene were also explicitly present in their systematic killing of millions of "undesirable" people including Jews, Gypsies, Jehovah's Witnesses and homosexuals during the Holocaust (much of the killing equipment and methods employed in the death camps were first developed in the euthanasia program). The scope and coercion involved in the German eugenics programs along with a strong use of the rhetoric of eugenics and so-called "racial science" throughout the regime created an indelible cultural association between eugenics and the Third Reich in the postwar years.[6]

The second largest eugenics movement was in the United States. Beginning with Connecticut in 1896, many states enacted marriage laws with eugenic criteria, prohibiting anyone who was "epileptic, imbecile or feeble-minded" from marrying. In 1898 Charles B. Davenport, a prominent American biologist, began as director of a biological research station based in Cold Spring Harbor where he experimented with evolution in plants and animals. In 1904 Davenport received funds from the Carnegie Institution to found the Station for Experimental Evolution. The Eugenics Record Office opened in 1910 while Davenport and Harry H. Laughlin began to promote eugenics.[7]

During the 20th century, researchers became interested in the idea that mental illness could run in families and conducted a number of studies to document the heritability of such illnesses as schizophrenia, bipolar disorder, and depression. Their findings were used by the eugenics movement as proof for its cause. State laws were written in the late 1800s and early 1900s to prohibit marriage and force sterilization of the mentally ill in order to prevent the "passing on" of mental illness to the next generation. These laws were upheld by the U.S. Supreme Court in 1927 and were not abolished until the mid-20th century. By 1945 over 45,000 mentally ill individuals in the United States had been forcibly sterilized. 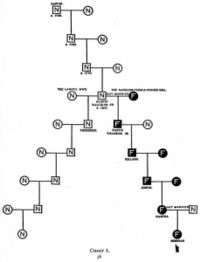 A pedigree chart from The Kallikak Family meant to show how one "illicit tryst" could lead to an entire generation of "imbeciles".

In years to come, the ERO collected a mass of family pedigrees and concluded that those who were unfit came from economically and socially poor backgrounds. Eugenicists such as Davenport, the psychologist Henry H. Goddard and the conservationist Madison Grant (all well respected in their time) began to lobby for various solutions to the problem of the "unfit". (Davenport favored immigration restriction and sterilization as primary methods; Goddard favored segregation in his The Kallikak Family; Grant favored all of the above and more, even entertaining the idea of extermination.)[8] Though their methodology and research methods are now understood as highly flawed, at the time this was seen as legitimate scientific research.[9] It did, however, have scientific detractors (notably, Thomas Hunt Morgan, one of the few Mendelians to explicitly criticize eugenics), though most of these focused more on what they considered the crude methodology of eugenicists, and the characterization of almost every human characteristic as being hereditary, rather than the idea of eugenics itself.[10]

The idea of "genius" and "talent" is also considered by William Graham Sumner, a founder of the American Sociological Society (now called the American Sociological Association). He maintained that if the government did not meddle with the social policy of laissez-faire, a class of genius would rise to the top of the system of social stratification, followed by a class of talent. Most of the rest of society would fit into the class of mediocrity. Those who were considered to be defective (mentally retarded, handicapped, etc.) had a negative effect on social progress by draining off necessary resources. They should be left on their own to sink or swim. But those in the class of delinquent (criminals, deviants, etc.) should be eliminated from society ("Folkways", 1907). 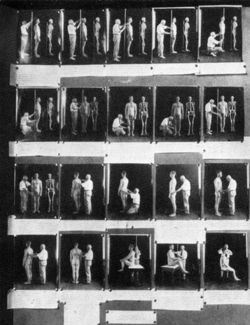 Anthropometry demonstrated in an exhibit from a 1921 eugenics conference.

With the passage of the Immigration Act of 1924, eugenicists for the first time played a central role in the Congressional debate as expert advisers on the threat of "inferior stock" from eastern and southern Europe. This reduced the number of immigrants from abroad to 15 percent from previous years, to control the number of "unfit" individuals entering the country. The new act strengthened existing laws prohibiting race mixing in an attempt to maintain the gene pool.[11] Eugenic considerations also lay behind the adoption of incest laws in much of the U.S. and were used to justify many antimiscegenation laws.[12]

Some states sterilized "imbeciles" for much of the 20th century. The U.S. Supreme Court ruled in the 1927 Buck v. Bell case that the state of Virginia could sterilize those it thought unfit. The most significant era of eugenic sterilization was between 1907 and 1963, when over 64,000 individuals were forcibly sterilized under eugenic legislation in the United States.[13] A favorable report on the results of sterilization in California, by far the state with the most sterilizations, was published in book form by the biologist Paul Popenoe and was widely cited by the Nazi government as evidence that wide-reaching sterilization programs were feasible and humane. When Nazi administrators went on trial for war crimes in Nuremberg after World War II, they justified the mass sterilizations (over 450,000 in less than a decade) by citing the United States as their inspiration.[14]

In Aldous Huxley's novel Brave New World, the world government employs massive eugenics through mechanical, automatic breeding and elimination of the unfit. The 1997 film Gattaca is based on the premise of such as "new eugenics," complete with biometrics, "designer babies," and "in-valids."