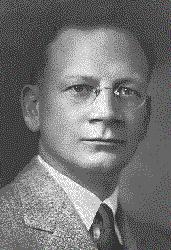 This article is based on a Wikipedia article on the same topic.

Edward R Dewey (1895-1978) was an economist who studied cycles in economics and other fields. Dewey first became interested in cycles while Chief Economic Analyst of the Department of Commerce in 1930 or 1931 because President Hoover wanted to know the cause of the Great Depression.[3] Dewey reports that economists gave him no consistent answers on the cause of the depression and he lost faith in economic methods. He received and took advice to study how business behaviour occurred rather than why.

Dewey devoted his life to the study of cycles, claiming that "everything that has been studied has been found to have cycles present." He carried out extensive studies of cyclicity in economic, geological, biological, sociology, physical sciences and other disciplines. In 1941 he formed the Foundation for the Study of Cycles with a board that included distinguished scientists and industrialists to act as a central clearing house of cycles studies from diverse areas. The foundation made studies of natural and social sciences as well as business and economics, and new methods were devised for isolating significant cycles present in time series. A magazine called "Cycles" was published from June 1950, and the foundation also published a four volume collection of reports on cycles including some of Dewey's selected writings on cycles named "Cycles Classic Library Collection". Together with author Og Mandino, Dewey published a book entitled Cycles: The Mysterious Forces That Trigger Events.[1] The Foundation for the Study of Cycles is still active and is located in offices in Albuquerque, New Mexico.

As a result of his research, Dewey asserted that seemingly unrelated time series often had similar cycles periods present and that when they did the phase of these cycles was mostly the nearly the same (cycle synchrony). He also asserted that there were many cycles with periods that were related by powers or products of 2 and 3. This claim is illustrated in the table below. To construct this table starting from the period 17.75 years, multiply by three as you proceed along diagonals from lower left to upper right, and multiply by two as you proceed along diagonals from lower right to upper left. Dewey stated that the underlined numbers are commonly occurring periods (in years):

Volume IV of the Cycles Classic Library Collection contains 1380 reports of cycles period determinations by scientists, doctors, economists and cycles researchers. In these reports there is a tendency for certain periods of cycles to be reported more commonly. These common periods include the underlined periods above and some other periods such as 9.6 years and 3.39 years (40.68 months) which Dewey says is the most commonly found period. Dewey further claimed that:

More than 500 different phenomena in 36 different areas of knowledge have been found to fluctuate in rhythmic cycles.[1]

Any such “multicyclic” approach must be set down as a mystical adoption of the fallacy of conceptual realism. There is no reality or meaning to the allegedly inde­pendent sets of “cycles.” The market is one interdependent unit, and the more developed it is, the greater the interrelations among market elements. It is therefore impossible for several or numer­ous independent cycles to coexist as self-contained units. It is pre­cisely the characteristic of a business cycle that it permeates all market activities.

and in America's Great Depression:[3]

Some economists—such as Warren and Pearson or Dewey and Dakin[4] —have believed that there are no such things as general business fluctuations—that general movements are but the results of different cycles that take place, at different specific time-lengths, in the various economic activities. To the extent that such varying cycles (such as the 20-year "building cycle" or the seven-year locust cycle) may exist, however, they are irrelevant to a study of business cycles in general or to business depressions in particular. What we are trying to explain are general booms and busts in business.

The Foundation for the Study of Cycles

The Foundation for the Study of Cycles is an international non-profit research organisation for the study of cycles of events. It was incorporated in the state of Connecticut by Edward R Dewey in 1941. It has published "Cycles" magazine and recorded the work of Dewey and many other cycles researchers through the years. The FSC also holds conferences and publishes its proceedings. It also publishes two journals aimed at investors Business and Investment Cycles and Cycles Projections.

It consists of four interrelated groups