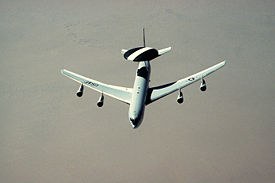 The E-3 Sentry is a large airborne warning and control system (AWACS) aircraft, which can detect aircraft and direct combat in at least a 250 mile radius. It also has some signals intelligence collection capability. AWACS may be employed alone or horizontally integrated in combination with other C3I-ISR plaforms, participating in decentralized execution of the air tasking order (ATO).

Built on a Boeing 707 airframe, the aircraft has a distinctive "flying saucer" radar enclosure on pylons above the fuselage. Due to its altitude, it can detect threats beyond the coverage of ground-based radar.

At the core of the E-3 is the AN/APY-2 wide-area search radar, which has gone both through incremental improvements, as well as a major revision to improve both its ability to see surface targets and process more targets. That radar, however, is of little use without computer and display support to the onboard battle management staff, and extensive communications to and from the aircraft.

Not always well-known to generalists is that the E-3 is much more than a flying radar station. It carries a substantial battle management staff of 13 to 19 people, who plan tactics and direct other aircraft. There is, however, a trend to put more of the staff on the ground, as is the case with the E-2 Hawkeye, making room for more sensors and processing on the aircraft, as well as having fewer constraints on the size of the staff.

As a high-altitude radio station, it can communicate with other sensors, such as communications intelligence (e.g., RC-135 RIVET JOINT) and electronic intelligence aircraft (e.g., RC-135 COMBAT SENT and EP-3 ARIES II). These are line-of-sight high-bandwidth links, in the Ultra-High Frequency (UHF) or higher frequency ranges.

The E-3 participates in the Joint Tactical Information Distribution System (JTIDS), which is lower-speed but has better over-the-horizon communications. The battle management staff can coordinate their planning with, for example, ships equipped with the AEGIS battle management system.

Some radio components will migrate to the more flexible Joint Tactical Radio System, although major use of JTRS and other software-defined radio may wait for the next generation of C3I-ISR aircraft.

Current E-3 aircraft, as well as the E-767 version built in the current Boeing 767 airframe, use the AN/APY-2 radar. It is a pulse-doppler radar with a mechanically rotating antenna.

Newer aircraft with similar missions, such as the Wedgetail 737 first operated by Turkey, use phased array radars to put a similar radar capability into a smaller aircraft.

In addition to the U.S. Air Force, E-3 variants are operated by the United Kingdom, France, Saudi Arabia, and NATO; the NATO aircraft are painted in the colors of Luxembourg. The U.S. aircraft, centrally based and operated by the 552nd Air Control Wing at Tinker Air Force Base in Oklahoma, have had the highest deployment time of all types flown by the U.S. Air Force. They are modified transport aircraft that can be refueled in midair.

The Wing reports to the Eighth Air Force, and receives tasking through the United States Strategic Command.

If for no other reason than they are in very old aircraft, the E-3's do not have an infinite life. Radar technology has also advanced, so that newer aircraft, with the same function, use mechanically simpler but more effective phased array radars. As mentioned, there are also trends to make the aircraft more of an electronics platform and put the staff on the ground. Other issues include additional sensors, such as the AN/APY-7 ground surveillance radar of the E-8 Joint STARS, and signals intelligence equipment. See C3I-ISR.