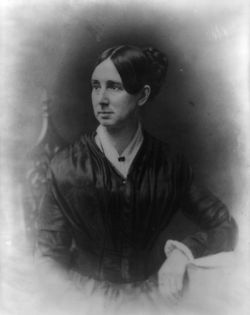 Dorothea Lynde Dix (April 4, 1802 – July 17, 1887) was an American activist on behalf of the indigent insane who, through a vigorous program of lobbying state legislatures and the United States Congress, created the first generation of American mental asylums. During the Civil War, she served as Superintendent of Army Nurses.

She was born in the town of Hampden, Maine, and grew up first in Worcester, Massachusetts, and then in her wealthy grandmother's home in Boston. She fled there at the age of twelve, to get away from her alcoholic family and abusive father. She was the first child of three born to Joseph Dix and Mary Bigelow. Her father was an itinerant worker.[1][a] About 1821 she opened a school in Boston, which was patronized by the well-to-do families. Soon afterwards she also began teaching poor and neglected children at home. But her health broke down, and from 1824 to 1830 she was chiefly occupied with the writing of books of devotion and stories for children. Her Conversations on Common Things (1824) had reached its sixtieth edition by 1869. In 1831 she established in Boston a model school for girls, and conducted this successfully until 1836, when her health again failed.[2] In hopes of a cure, in 1836 she traveled to England, where she had the good fortune to meet the Rathbone family, who invited her to spend a year as their guest at Greenbank, their ancestral mansion in Liverpool. The Rathbones were Quakers and prominent social reformers, and at Greenbank, Dix met men and women who believed that government should play a direct, active role in social welfare. She was also exposed to the British lunacy reform movement, whose methods involved detailed investigations of madhouses and asylums, the results of which were published in reports to the House of Commons.

After she returned to America, in 1840-41, Dix conducted a statewide investigation of how her home state of Massachusetts cared for the insane poor. In most cases, towns contracted with local individuals to care for people with mental disorders who could not care for themselves, and who lacked family and friends to provide for them. Unregulated and underfunded, this system produced widespread abuse. After her survey, Dix published the results in a fiery report, a Memorial, to the state legislature. "I proceed, Gentlemen, briefly to call your attention to the present state of Insane Persons confined within this Commonwealth, in cages, stalls, pens! Chained, naked, beaten with rods, and lashed into obedience."[3] The outcome of her lobbying was a bill to expand the state's mental hospital in Worcester.

Henceforth, Dix traveled from New Hampshire to Louisiana, documenting the condition of pauper lunatics, publishing memorials to state legislatures, and devoting enormous personal energy to working with committees to draft the enabling legislation and appropriations bills needed to build asylums. In 1846, Dix travelled to Illinois to study mental illness. While there, she fell ill and spent the winter in Springfield recovering. As she recovered, she worked on research, and submitted a report to the January 1847 legislative session, which adopted legislation to establish Illinois' first state mental hospital.[4] In 1848, Dorothea Dix visited North Carolina and called for reform in the care of mentally ill patients. In 1849, when the North Carolina State Medical Society was formed, the construction of an institution in the capital, Raleigh, for the care of mentally ill patients was authorized. The hospital, named in honor of Dorothea Dix, opened in 1856.[5] She was instrumental in the founding of the first public mental hospital in Pennsylvania, the Harrisburg State Hospital, and later in establishing its library and reading room in 1853.[6]

The culmination of her work was the Bill for the Benefit of the Indigent Insane, legislation to set aside 12225000 acres of federal land for the benefit of the insane and the remainder for the "blind, deaf, and dumb"), with proceeds from its sale distributed to the states to build and maintain asylums. Dix's land bill passed both houses of Congress, but in 1854 President Franklin Pierce vetoed it, arguing that the federal government should not commit itself to social welfare, which was properly the responsibility of the states. Stung by the defeat of her land bill, in 1854 and 1855 Dix traveled to England and Europe, where she reconnected with the Rathbones and conducted investigations of Scotland's madhouses that precipitated the Scottish Lunacy Commission.[7]

The care of the insane in Nova Scotia drew Dix to visit the British colony in 1853. During her visit she travelled the remote and dangerous Sable Island to investigate reports of insane patients being abandoned on the island. The reports turned out to be largely unfounded but while on Sable, Dix assisted in a shipwreck rescue and upon her return to Boston, she led a successful campaign to send upgraded lifesaving equipment to the island.[8]

During the American Civil War, Dix was appointed Superintendent of Army Nurses by the Union Army, beating out Dr. Elizabeth Blackwell. Unfortunately, the qualities that made her a successful crusader—independence, single-minded zeal—did not lend themselves to managing a large organization of female nurses.

Dix set guidelines for nurse candidates. Volunteers had to be between the ages of 35 and 50 and had to be plain-looking. They also had to wear drab and unhooped black or brown dresses and were forbidden to wear jewelry or cosmetics. Dix did this to avoid sending vulnerable, attractive young women into the hospitals, where she feared they would be exploited by the men there (doctors as well as patients). Dix would often fire volunteer nurses she hadn't personally trained or hired (earning the ire of supporting groups like the United States Sanitary Commission).

At odds with Army doctors, Dix feuded with them over control of medical facilities and the hiring and firing of nurses. She also had to deal with doctors and surgeons who did not want female nurses in their hospitals. To solve the impasse, the War Department introduced Order No.351 in October 1863.[9] It granted both the Surgeon General (Joseph K. Barnes) and the Superintendent of Army Nurses (Dix) the power to appoint female nurses. However, it gave doctors the power of assigning employees and volunteers to hospitals. This relieved Dix of real responsibility and made her a figurehead. Meanwhile, her fame and influence was being eclipsed by other prominent women like Dr. Mary Edwards Walker and Clara Barton. She submitted her resignation in August 1865[9] and would later consider this "episode" in her career a failure. Although thousands of Catholic nuns successfully served as Army nurses, Dix distrusted them; her anti-Catholicism undermined her ability to work with Irish and German sisters, whom she ridiculed as robotic and unfeeling.[10]

However, her even-handed caring for Union and Confederate wounded alike, which may not have endeared her to Radical Republicans, assured her memory in the South. Her nurses provided what was often the only care available in the field to Confederate wounded. Georgeanna Woolsey, a Dix nurse, said, "The surgeon in charge of our camp...looked after all their wounds, which were often in a most shocking state, particularly among the rebels. Every evening and morning they were dressed." Another Dix nurse, Julia Susan Wheelock, said, "Many of these were Rebels. I could not pass them by neglected. Though enemies, they were nevertheless helpless, suffering human beings."

When Confederate forces retreated from Gettysburg, they left behind 5000wounded soldiers who were then treated by Dix's nurses. Cornelia Hancock wrote about what she saw—"There are no words in the English language to express the suffering I witnessed today...."[11]

Following the war, she resumed her crusade to improve the care of prisoners, the disabled, and the mentally ill. Her first step was to review the asylums and prisons in the South to evaluate the damage done to their facilities.

In 1881, Dix moved into the New Jersey State Hospital, Morris Plains, where the state legislature designated a suite for her private use as long as she lived. Although an invalid, she still managed to correspond with people from England to Japan. Dix died on July 17, 1887. and was buried in Mount Auburn Cemetery in Cambridge, Massachusetts.

Dix was elected President for Life of the Army Nurses' Association (a social club for Civil War Volunteer Nurses), but had little to do with the organization. She opposed its efforts to get military pensions for its members.[9]

In 1983[12] the United States Postal Service honored her life of charity and service by issuing a 1¢ Dorothea Dix Great Americans series postage stamp.

A United States Navy transport ship serving in World War II was named for Dix, the USS Dorothea L. Dix (AP-67). The ship served from 1940 to 1946, receiving five battle stars for her service during the war. The Bangor Mental Health Institute was renamed in August 2006 to the Dorothea Dix Psychiatric Center.[13]

She wrote a variety of other tracts on prisoners. She is also the author of many memorials to legislative bodies on the subject of lunatic asylums and reports on philanthropic subjects.

a. ^ Internet Archive currently lists seven copies of Francis Tiffany's book, of varying replication quality. The book was reprinted a number of times, and publishers may vary. However, the text is identical. Unfortunately, two of the easier to read versions uploaded to Internet Archive, namely this and this (the two bottom listings), are missing the title page, so were not utilised for the citation in this article. The information provided in the Internet Archive listings should never be used for citation, as they can contain inaccuracies (as can Google book listings). The uploaded, visible text itself should always be relied upon.