Dino A. Brugioni (born 1921) was a senior official at the CIA's National Photographic Interpretation Center (NPIC), which became one of the founding components of the National Geospatial-Intelligence Agency. He was an imagery analyst and also served as NPIC's Chief of Information. During his 35-year career, Mr. Brugioni helped establish imagery intelligence (IMINT) as a national asset to solve intelligence problems. Even after retirement, Mr. Brugioni has been called the world's foremost IMINT analyst[1].

After retirement, he has been active in encouraging the use of declassified photographic intelligence for historical research. His book, Eyeball to Eyeball [2] is an extensive unclassified history of US imagery intelligence.

Mr. Brugioni flew in 66 bombardment and a number of reconnaissance missions in WWII over North Africa, Italy, Germany, Yugoslavia and France. He received the Purple Heart, 9 air medals and a Distinguished Unit Citation. After the war, he received BA and MA degrees in Foreign Affairs from George Washington University. He joined the CIA in March 1948 and became an expert in Soviet industries. In 1955, he was selected as a member of the cadre of the newly formed Photographic Intelligence Division that would interpret U-2, SR-71 and satellite photography.

The American U-2 spy plane began flights over Russia in 1956. Under the cover of an abandoned Washington car dealership, the first CIA analysts were assembled to review the U-2's photos. The founding analysts included Dino Brugioni and small team of World War II photo interpreters, under the direction of Art Lundahl. Analysis of U-2 photography dispelled the "bomber gap" in 1956 and the "missile gap" in 1961. Analysis was also conducted on U-2 photography taken during the Suez, Lebanon, Chinese Off-Shore Islands, Middle East and Tibetan crises.

In January 1961, Lundahl's CIA group acquired military imagery intelligence capabilities [3] to form the National Photographic Interpretation Center (NPIC), as a part of the CIA Directorate of Science and Technology. Brugioni was a key deputy to Lundahl. 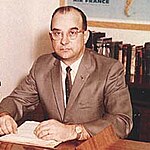 Role in the Cuban Missile Crisis

U-2 photographs taken on [5] October 14, 1962, by some of the first U-2 aircraft piloted by US Air Force members rather than CIA personnel, brought back photographs, in which the NPIC analysts found visual evidence of the placement of Soviet SS-4 Medium Range Ballistic Missiles (MRBM), capable of hitting targets, in the continental United States, with nuclear warheads. This triggered the Cuban Missile Crisis, sending the US intelligence community into maximum effort and triggering an unprecedented military alert.

The October 14 high-altitude photographs, taken from the periphery of Cuba, led to the US taking the additional risk of direct overflights of Cuba, at the orders of Secretary of Defense Robert S. McNamara. McNamara, Chief of Naval Operations George W. Anderson and Lundahl concurred that the US Navy's Light Photographic Squadron VFP-62, flying F8U-1P Crusader fighters in a reconnaissance role, were best qualified to take low-level photographs, flying directly over Cuba. As well as the U-2 photographs, the low-level Navy photographs also streamed into NPIC, where Brugioni and colleagues analyzed them around the clock.

(Klein) described Lundahl's presenting the October 14 photographs and their interpretation to President John F. Kennedy: "Mr. Lundahl, when Kennedy was shown the photographs, he turned his head, looked at Lundahl, and said, "Are you sure?" And Mr. Lundahl said, "I'm as sure of this, Mr. President, as we can be sure of anything in the photo interpretation field. And you must admit that we have not led you astray on anything that we have reported to you previously." And the President said "Okay.""

Brugioni's book, while a general history, deals extensive with the role of imagery intelligence in the Cuban Missile Crisis. A selection of the actual photographs, as well as supporting data such as the chart of CIA photo are at the George Washington University National Security Archive [6].

Another source on technique, discussing the obscure technique of "crateology", or recognizing the characteristic ways in which the Soviets crated military equipment, is Hilsman's To Move a Nation [7]. A photograph analyzed using the crateology technique is shown in [6].

After the Cuban Missile Crisis

As more and more intelligence photographs are declassified, essentially all from WWII and a great many from the CORONA, ARGON, LANYARD and GAMBIT satellites, Brugioni has been active in guiding historians to use these collections in historical research.

Brugioni was one of the first historians to present photographic evidence of Auschwitz. A photographic plane was photographing a I.G. Farben factory in the general area, and didn't turn off its camera until after it had passed over the Monowitz camp [8]. The factory was the main interest, and the WWII interpreters just marked Auschwitz as an unidentified installation. No one in that organization knew about human intelligence reports of the death camps, and only in the seventies did researchers learn the significance of the camp photographs. [9].

Brugioni explains why Allied intelligence knew little about the targets, even after the President asked that the camps be bombed[9]. "When the bombing specialists were ordered to formulate plans for bombing the Auschwitz-Birkenau Extermination Complex, officials of the Air Ministry, the Royal Air Force Bomber Command and the U.S. 8th Air Force bemoaned the lack of aerial photographic coverage of the complex. In fact, such photos were readily available at the Allied Central Interpretation Unit at Royal Air Force Station Medmenham, 50 miles outside of London and at the Mediterranean Allied Photo Reconnaissance Wing in Italy. The ultimate irony was that no search for the aerial photos was ever instituted by either organization. In retrospect, it is a fact that by the time the Soviet Army reached Auschwitz on January 27, 1945, the Allies had photographed the Auschwitz-Birkenau Extermination Complex at least 30 times."

Mr. Brugioni is an authority on contrived or altered photography, described in his book Photo Fakery. His interest in the Civil War in the West is chronicled in The Civil War in Missouri and his interest in reconnaissance in From Balloons to Blackbirds. Mr. Brugioni has written more than 90 articles, mainly on the application of overhead imagery to intelligence and other fields. He has helped with and appeared in over 75 news and historical television programs.

Mr. Brugioni has received numerous citations and commendations, including the CIA Intelligence Medal of Merit, the CIA Career Intelligence Medal and the prestigious U.S. Government Pioneer in Space Medal for his role in the development of satellite reconnaissance. He twice received the Sherman Kent Award, the CIA's top award for outstanding contributions to intelligence. However, he remains most proud of the commendation he received from President John F. Kennedy for contributions during the Cuban Missile Crisis. On April 13, 2005, he was inducted into the National Geospatial-Intelligence Agency Hall of Fame.

"If you draw a 25-mile circle in most areas of the world, a man is born, lives and dies within that circle. So if you analyze it closely, you can find out what he eats, what he does and how long he lives."

"We were determined to prove the value of aerial photography." (said of his CIA team's first assignment in 1956)

"If you walk in a field in the early morning, you create a path through the field when you disturb the dew. This could be seen from 100 miles up in space. We see things the groundling is not cognizant of at all on Earth."