For the inertial force in a rotating frame, see Coriolis force.

In psychophysical perception, the Coriolis effect, also referred to as the Coriolis illusion, is a form of disorientational distress that can lead to nausea.[1][2] The Coriolis effect is a particular concern of pilots, where it can cause extreme discomfort and incorrect responses when maneuvering an airplane.[3][4][5][6] The underlying cause is the misinterpretation of rotational motion sensed by the vestibular system of the inner ear, as explained below. 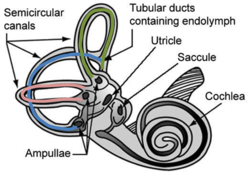 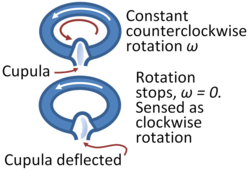 (PD) Image: John R. Brews
When the semicircular canal stops rotating, inertia causes the cupula to register a false rotation in the opposite sense.

The vestibular system of the inner ear senses motion and body position, and is very important for maintaining balance. The three semicircular canals observe angular acceleration in the three planes of motion: pitch (nod yes), yaw (twist your head no), and roll (pivot head from left to right shoulder without twisting). The otolith organs, that is, the utricle and the saccule detect linear acceleration and the tilt of the head.[7]

The semicircular canals are filled with a fluid, called the endolymph. Under angular acceleration, the endolymph presses unequally upon the two sides of a membrane, the cupula, causing it to be deflected. The endolymph action lags the motion of the canal itself, due to its inertia, leading to a relative counterclockwise pressure on the cupula that is interpreted correctly as a clockwise acceleration.

If angular motion is held constant, a steady state is reached in approximately 15 seconds where the endolymph and the canal are moving at the same rate, the cupula no longer deflects, and the motion is not sensed. This situation is shown in the upper panel of the figure. If now the rotation abruptly stops, the canal stops rotating but the endolymph takes time to adapt, leading to a relative counterclockwise rotation of the endolymph. That counterclockwise relative rotation correctly indicates the acceleration, but leads to the false sensory interpretation of rotation in the opposite direction to what previously prevailed, even though actually all motion has stopped. The situation is shown in the bottom panel. 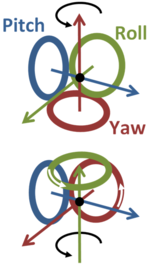 The mechanism behind the Coriolis effect is related to head motions that reorient the three semicircular canals while a person is rotating, as shown in the figure. The figure is an idealization, supposing the three canals are exactly in three orthogonal planes, and the head is tipped exactly forward. If the head is vertical, and rotation is about the vertical axis, the semicircular canal in the horizontal plane registers the rotating motion. If rotation continues, a steady state is reached where the cupula is not deflected and the rotation is not sensed. If now the head is tilted forward, for simplicity say by 90°, then the yaw canal becomes vertical and this canal is no longer in rotation; its endolymph begins to slow down to match the motion of its canal. The subject then perceives this effect as counter-rotation about a horizontal axis, although actually no motion is occurring. At the same time, the roll canal previously in a vertical plane is brought into a position where it must register the rotation, and its endolymph accelerates. The combined effect of all three semicircular canals is to produce an apparent rotation in a direction unrelated to what is actually happening. It causes a sensation of tumbling, rolling or yawing that is the Coriolis effect.[8]

An interesting conjecture, however, is that the Coriolis force might be detected by the ear in birds, enabling a navigational compass.[10]