Cooperative Engagement Capability is part of the U.S. Navy FORCEnet architecture of cooperating sensors and associated computers, data fusion computers, and weapons and weapons control systems that share not only situational awareness, but fire control across platforms. It both displays, and allows community members to affect, the common operational picture. It differs from the Joint Tactical Information Distribution System (JTIDS), in that JTIDS target reports come from the perspective of a single platform, and often a single sensor on that platform. 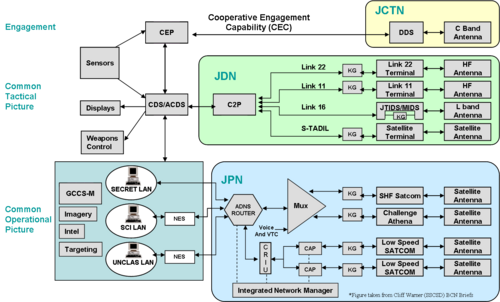 CEC amidst other Navy C3I-ISR systems. KG's are encryptors

A combat platform, such as Ticonderoga-class cruisers and Burke-class destroyers, has a Combat Direction System (CDS). AEGIS is the core of their CDS.

Through a Command and Control Processor (C2P), these platforms also connect to Tactical Data Links (TDL), such as JTIDS. Advanced TDL (ATDL) include the upcoming JTIDS Link-22 (replacing Link 11); the C2P interconnects Link 11 and the current Link 16 of JTIDS.

The Command and Control Processor (C2P) C2P interconnects between a combat platform’s and the Tactical Data Links (TDL) such as JTIDS. AEGIS is the CDS on [. It is considered a gateway as described in the ATDLs discussion above. It is the data forwarder between Links-11 and 16.[2]

CEC processors synchronize a distributed view among the DDS-linked cooperating participants, adding their local views to ATDL, and passing the fused data to CDS workstations, which form the common tactical picture. The CDS interface to displays and weapons control systems, as well as to the more operational-level sources of information. These sources include the Global Command and Control System-Maritime, and all-source intelligence systems at TOP SECRET/SCI, SECRET, and unclassified levels.

Many scenarios are possible; some hypothetical sequences will illustrate. To start the first scenario, remember that the platforms also have access to operational as well as tactical information. In a theater of operations, national-level imagery intelligence information has identified the presence of rocket-boosted cruise missiles in a given geographic area. That area is under the surveillance of other national-level measurement and signature intelligence sensors, such as the Defense Support Program satellites.

A DSP detects the heat energy of a launch, and passes that information back through national networks, which deliver it to the theater via appropriate intelligence networks. It is known that the task group in which the group anti-air warfare officer is embarked is within the range of that missile, as are some nearby land applications.

An Air Force E-3 Sentry AWACS, high over the landmass, detects, on the edge of its coverage, a fast-moving radar target consistent with the cruise missile type known to have been at the location where DSP detected the apparent launch. This message arrives aboard the group anti-air flagship, USS Chosin (CG-65) via JTIDS Link 16. CEC automatically searches for sensors and weapons in areas applicable to the new threat.

It determines that USS Normandy (CG-60), a Ticonderoga class cruiser, returning to a shore base to get more long-range missiles, is the closest to a point on the predicted missile track. CEC has that ship train her AN/SPS-49 long-range search radar, and gets confirmation of the missile track. Chosin now has a confirmed inbound threat, and passes that information, via CEC, to the other AEGIS vessels of the group.

The next ship to acquire the track is the Burke-class destroyer, USS Winston Churchill (DDG-81) along the path, which is not equipped with the AN/SPS-49 radar aboard the Ticonderogas such as Chosin. Churchill gets a firm lock on the incoming missile, and sets up a RIM-156 Standard SM-2 missile launch to intercept it. In the inner defensive ring around the carrier, USS Lake Erie (CG-70), picks up the missile and prepares a backup SM-2.

Churchill fires, but the target maneuvers. While Churchill's missile still might hit, Lake Erie has a better engagement geometry, and CEC agrees that the latter should fire a backup missile. Churchill illuminates the target with her AN/SPG-62 directional illuminator radar, as has Lake Erie fire another SM-2. With another target course change, Churchill still has the best geometry to illuminate the target for the SM-2's final semi-active radar homing, and keeps the SPG-62 on target. The Lake Erie missile picks up the Churchill illuminator, goes into final lock, and destroys the target.

As the ships take out the missile, national or theater commanders backtrack the course of the missile back to the point where the DSP detected the launch. They wait until imagery intelligence satellites of the National Reconnaissance Office and Air Force unmanned aerial vehicles are in range, and find a group of truck-mounted antiship cruise missile launchers. The mobile launchers are within range of a U.S. Army ATACMS surface-to-surface missile battery, which takes them under fire. Meanwhile, theater intelligence analysts look at previous imagery, and find the building from which the missile trucks left. They send its coordinates to the Normandy, which loads them into BGM-109 Tomahawk missiles, which are fired at the missile launcher truck facility, destroying it.