Clostridium tetani is a rod-shaped, anaerobic, and endospore-forming bacterium that is responsible for the tetanus disease, a condition of the central nervous system affecting an estimated 350,000 people a year, worldwide. Single rods, or bacilli, have terminal spherical endospores creating a clubbed appearance. This bacterium is Gram-positive, a characteristic shared by other related species belonging to the Clostridium genus. Bacteria classified as Clostridium are important pathogens, such as C. botulinum, an organism producing a toxin in foods or wounds that causes botulism and C. perfringens, that causes a wide range of symptoms, from food poisoning to gas gangrene.The peptoidoglycan structure of the C. tetani's cell wall allows it to retain the violet crystals in a Gram stain. The resulting appearance under a microscope is often described as resembling a tennis racket or a collection of drumsticks. The organism is an obligate anaerobe found in soil and most often in animal feces.[1]

Sir Charles Bell (1774-1842) was a Scottish surgeon and painter living in the late 18th century/early 19th century. His anatomical studies and illustrations were an enlightening resource to both the medical and artistic realms alike. In addition to anatomical illustrations, Bell also made drawings of patients’ suffering from injury or disease before he operated on them. His paintings were then used in books and often published as teaching aids. The painting below, called Opisthotonus. (Tetanus), c.1809, shows the condition of tetanus and is possibly the best known of Bell’s paintings. The characteristic rigidity of the body is referred to as opisthotonos and risus sardonicus. The original painting is located in the Royal College of Surgeons of Edinburgh, Scotland.

According to a study published by Yale University in 2003 entitled "The Genome Sequence of Clostridium tetani, the Causative Agent of Tetanus Disease", the genome of Clostridium tetani consists of a 2,799,250-bp chromosome encoding 2,372 open reading frames, or ORFs. An ORF is a portion of an organisms genome that potentially codes for the structure of a protein. It was found that a plasmid of Clostridium tetani, named pE88 in sequencing, harbors the genes for the tetanus toxin (tetX) and its direct transcriptional regulator TetR. The tetanus toxin and a collagenase are encoded on this 74,082-bp plasmid that contains 61 ORFs. The results of the study showed 28 of the 61 ORFs code for proteins that show similarities to those with known structures and functions including collagenase. Collegenase is an exotoxin that aids in the pathogenesis and spread of tetanus by targeting muscle and connective tissues; the sequence of which was identified alongside that of the tetanus toxin.[2]

According to the Yale University 2003 study, the origin of the bacterial plasmid pE88, coding for the tetanus toxin, remains unclear. The study concluded over 50% of all ORFs on pE88 are unique to C. tetani. However, homologous ORFs were found when compared with the genomes of both Clostridium perfringens, and Clostridium acetobutylicum, coding for proteins involved in lipid degradation and amino acid decomposition. Many of these comprise the Clostridial "backbone" of ORFs. 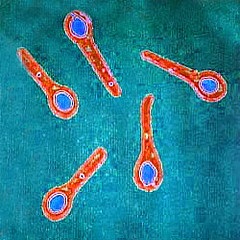 Clostridum tetani. In the above image, the blue circle is indicative of the terminal endospore surrounded by its protective coating.

Clostridium tetani is a rod-shaped, obligate anaerobe that is saprophytic in nature. The bacterium forms a terminal endospore through sporulation when survival becomes difficult, usually in the presence of oxygen. In its vegetative state, the bacterium is sensitive to external elements, such as temperature, and has evenly distributed flagella around its surface for motility. As it matures, C. tetani forms a spherical terminal endospore that is enclosed in multiple layers of protective coats, allowing for resistant dormant survival. Endospores can survive extremely long periods of time until environmental stimuli trigger germination.[3]

Clostridium tetani spores are commonly found in manure-treated soil or as parasites in the gastrointestinal tracts of animals and fecal matter of various species. Sometimes spores are also found in human skin and contaminated heroine transferred via dirty needles. According to Kenneth Todar at the University of Wisconsin, Madison Department of Bacteriology, after entering the human body at a wound, laceration or burn site, germination of C. tetani in dead body cells (lacking oxygen) leads to infection and subsequent inflammation. Toxins are produced during cell growth, sporulation and ultimate lysis. The toxins travel along the pathways of the central nervous system causing a condition known as tetanus. [4]

Clostridium tetani spores enter body tissue through wounds, lacerations, and burns, settling in dead cells that lack oxygen. Initially unnoticed, the spores are then able to germinate and spread its toxin, long before diagnosis and pursuit of treatment. All identified strains have been found to produce a common toxin called tetanospasmin. The potent neurotoxin blocks the release of necessary neurotransmitters in the central nervous system's transmission of inhibitory nerve impulses. It is the inhibitory neuron messages that allow the muscles of the body to relax by halting the release of acetylcholine from excitatory neurons, which stimulate muscle contraction. The resulting effect in humans begins with muscle spasms at the sight of infection. As the infection spreads along neurons of the spinal chord and brain, it could lead to spastic paralysis and may be fatal. The most recognized associated manifestation of the disease is trismus, or lockjaw. The muscles and nerves of the neck and jaw are commonly the first to be affected before spreading to other parts of the body. Death is usually the result of breathing difficulties that arise due to the spasms and lead to respiratory arrest.

Tetanus has been known to take up to 10 years before manifestations may be observed. Aside from lockjaw, difficulty in swallowing, drooling, and persistent back spasms are among early signs. Later symtoms include perfuse sweating, hyperthermia, cardiac arrythmias and fluctuations in blood pressure. These manifestations indicate the toxic affects of both the somatic and autonomic nervous systems that involve voluntary and involuntary muscle contractions, respectively. The disease can also be transferred to a fetus by a mother with no immunity through the placenta, where nutrients are absorbed into the blood of the developing baby via the umbilical chord. This is a neonatal infection and the baby is born with the disease.

Therapy for suspected cases and diagnoses include antibiotics, such as penicillin and tetracyclines, in addition to antitoxin treatment and prompt surgical care of the infected wounds and tissues. Vaccination is available for proactive prevention. Individuals are actively immunized with DPT (diphtheria, pertussis, tetanus) toxoid as infants, and should continue vaccination in ten year intervals. The toxoid prompts human cells to make neuralizing antibodies against the binding component of the tetanus toxin. Individuals are passively immunized with tetanus immuno globulin .

The tetanus disease is relatively uncommon in North America and industrialized countries. The condition occurs more often in underdeveloped countries where immunizations are not widely available and agricultural regions where contact with animal fecal matter is likely.

As indicated above, it has been found through comparative analysis that homologous ORFs exist in the genomic structures of Clostridium tetani and other related clostridial species. In this study, by Syed Imteyaz Alam, Sunita Bansod and Lokendra Singh of the Biotechnology Division, Defence Research & Development Establishment in Gwalior India, ORF similarity between Clostridium tetani and Clostridium perfringens is further explored. The study aims to establish applications in the medical arena with regard to vaccination and immunization of the diseases of these pathogenic agents. The possibility of cross-protection of toxins produced by the two pathogens is tested through the study of common epitopes, or portions of the bacterial molecules that are recognized by the immune system. The findings indicate eight predominant cross-reactive spots, in which there was 65–78% sequence similarity within each ORF of Clostridium tetani and their closest homologues in C. perfringens. The results "provide basis for the search of potential vaccine candidates with broader coverage, encompassing more than one pathogenic clostridial species."[5]

Identification and characterization of the surface-layer protein of Clostridium tetani

In a study conducted by Centre for Molecular Microbiology and Infection, Division of Cell and Molecular Biology, Imperial College London, UK; and Wellcome Trust Clinical Research Unit, Hospital for Tropical Diseases, the cell wall of Clostridium tetani has been investigated and its protein identified. It has been found that Clostridium tetani, like many bacteria, produces a surface layer called the paracrystalline layer which completely surrounds the exterior of the cell. In some bacteria, the surface layer is connected to its pathogenesis. Results of the study of the extracted cell wall show two proteins present in the cell wall. One has been identified unambiguously as the surface-layer protein (SLP). The gene, slpA, has been located in the genome of C. tetani E88 that encodes the SLP. After conducting sodium dodecyl sulfate-polyacrylamide gel electrophoresis, the actual protein has been found to be significantly larger than that predicted from the gene; however the protein does not appear to be glycosylated. Furthermore, analysis of five C. tetani strains, including three recent clinical isolates, shows considerable variation in the sizes of the SLP. [6]

Clostridium botulinum and Clostridium tetani, respectively, produce potent toxins, botulinum neurotoxin (BoNT) and tetanus neurotoxin (TeTx), which are responsible for severe diseases, botulism and tetanus. Neurotoxin synthesis is a regulated process in Clostridium. The genes botR/A in C. botulinum A and tetR in C. tetani positively regulate expression of BoNT/A and associated non-toxic proteins (ANTPs), as well as TeTx respectively. TetR immediately precedes the tetX gene in C. tetani. This study shows that BotR/A and TetR function as specific alternative sigma factors rather than positive regulators based on the following results. Findings show that TetR is seemingly related to a new subgroup of a family of genes that includes TcdR and UviA, which, respectively, regulate production of toxins A and B in related species C. difficile and bacteriocin in C. perfringens. Overall, it is concluded that a common regulation mechanism probably controls toxin gene expression in these four toxigenic clostridial species. [7].