In the 1967, an organisation was set up in Northern Ireland called the Northern Ireland Civil Rights Association (NICRA). It was inspired by the civil rights movement in the USA and modelled on the National Council for Civil Liberties but, although it initially had support and membership of moderate and liberal unionists, from the outset many of its founders and members were members of the Irish Republican Army.[1][2]

NICRA's main concern had originally been for Northern Ireland's itinerant population, then known locally as 'gypsies'.

Other activist groups were later set up, such as the Derry Housing Action Committee. Towards the end of the 1960s, NICRA became increasingly militant and it became clear that its motivation wasn't restricted to peoples' rights, but also to the ideology of a united Ireland. Indeed, the organisation began to openly focus specifically on the rights of Roman Catholics. This eventually led to the end of support from the various Protestant and unionist communities in Northern Ireland.

The hastily-prepared Cameron report was commissioned to examine the charges levelled by NICRA at the Northern Irish government and to investigate the causes of civil disturbances. The report, when published in appeared to lend weight to NICRA's accusations of gerrymandering, imbalance in housing allocation and discrimination in employment. When it was published in September 1969, members of NICRA accepted these parts of the report unquestioningly.

By that stage, the population had become particularly polarised along religious lines. Even before the report had been commissioned however, the Northern Irish government had already introduced a five-point reform programme to answer each of NICRAs demands, including universal suffrage for local elections. Violence during protests, some of which were opposed by counter-demonstrations by unionists, continued and, less than half a year later, the Prime Minister of Northern Ireland resigned. His successor on the 1st of May 1969, pledged to continue the reform programme and the civil rights organisations slowed down their campaign.

The relative peace was short-lived as several Orange Order parades were attacked that Summer. More serious rioting started on the 12th of August in Derry, after an Apprentice Boys of Derry parade attracted rioting from the nationalist Bogside area of the city. The rioting spread to other areas of Northern Ireland, encouraged by some Nationalist leaders. After a police station in Belfast was attacked by Republicans, shots were exchanged between the police and members of the IRA. The police managed to move the rioters back. Neighbouring Protestants had gathered and followed the police as they forced Republican rioters back. The Protestants set fire to houses all along Bombay Street, and in various streets in the area.

Houses inhabited by people of both religious backgrounds were burned, in many cases razed to the ground, leaving many people homeless. The rioting was sustained over many days throughout Northern Ireland and, as a result, the police force was stretched and exhausted. The central Westminster government at last decided to give aid to the people of Northern Ireland. The decision to reinforce the police with regiments of the Army has been criticised though, with the suggestion that a more normal decision would have been to reinforce the police in Northern Ireland with police from other forces throughout the United Kingdom.

At the beginning though, the Army was welcomed by a Roman Catholic population which had been beseiged by a larger surrounding Protestant population. Events led to a reversal of this welcoming attitude though, and the IRA started a guerilla campaign in earnest against the Army, the police, business owners and civilians alike. The IRA's campaign eventually expanded to England and militant unionists, called Loyalists, started up their own terrorist 'defence forces', engaging in a campaign of assassination and murder of Roman Catholics and Nationalist and Republican political activists.

The years from 1954 to 1965 are often regarded as the Civil Rights Revolution, or Civil Rights Movement in the United States.

While most of the political elite in Washington tended to be sympathetic to the Civil Rights cause (if not totally in favor of legislating in favor of civil rights), international factors was used as an argument; Americans, however, ignored foreign opinions.

The Brown vs. Board of Education (1954) decision in the US Supreme Court was the culmination of a judicial movement that had been underway for a decade. It had the short-term effect of ending segregated schools in border states and the long-term effect of ending legalized segregation in schools.

Black leaders claimed that their own efforts were more important in causing change, emphasizing activities like bus boycotts, lunch-counter sit-ins, marches, and non-violent protest. A black Baptist minister from Atlanta Martin Luther King emerged from the Montgomery Bus Boycott as a leader of the new movement. Painstaking work by labor unions, civil rights groups, and mainstream churches, aided by popular outrage at the violent techniques used by police in some southern cities fueled a national consensus that segregated and second-class status had to end. Some of the organizations that spearheaded the movement were the Southern Christian Leadership Conference (SCLC), the Student Non-Violent Coordinating Committee (SNCC, or 'Snick'), the Congress of Racial Equality (CORE), and the older National Association for the Advancement of Colored People (NAACP). All were committed to non-violence and Thoreauean/Gandhian Civil Disobedience in the early years, a tactic that was politically essential in order to win public support and to avoid alienating northern voters. Meanwhile. a growing black radical movement (such as Black Power led by Stokely Carmichael and Muslims advocated by Malcolm X), and inner city gangs (such as the Black Panthers, divided black support in the movement. By 1966, the tensions inside the black community were ripping apart the civil rights coalition, as the radicals called for the ousting of all whites in leadership positions. 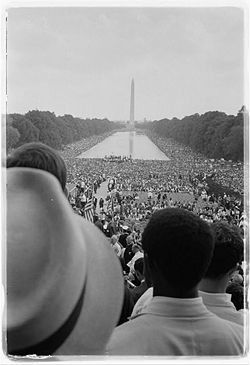 Among presidents, however, only Lyndon Johnson actively favored the movement. Dwight Eisenhower advocated a policy of new federalism which was a federal "hands-off" policy regarding states' legislative domains. Only when Orville Faubus attempted to use an instrument of the U.S. armed forces, and thereby usurping Eisenhower duties as commander-in-chief, to block a federal court order in the Little Rock incident did Eisenhower act. John Kennedy for most of his administration was chastened by the narrow margin of victory by which he won the 1960 election and so needed the backing of southern Democrats if he were to maintain his hopes of re-election in 1964. Only after the televised brutal crackdown in Birmingham in June 1963 did Kennedy act by sending the Civil Rights Bill to Congress. But this was the limit of his involvement in the Civil Rights movement. His brother, Robert F. Kennedy while U.S. Attorney General, however, was much more proactive in seeking court orders and using U.S. marshals to protect African Americans during the movement.

In 1957, governor Orville Faubus of Arkansas mobilized the National Guard to prevent a court ordered desegregation of Little Rock Public School, a decision overcome by President Eisenhower's decision to to use Federal troops to enforce legality. In the following years, many southern states and legislatures expressed forceful opposition to what was considered Federal tyranny, and some revised their flags to include the old Confederate banner. In 1962, the prospect of a black student being admitted to the University of Mississippi resulted in lengthy campus riots suppressed by Federal troops and a national guard now brought under Federal control.

Vigilante and terrorist groups formed, such as the reborn Ku Klux Klan. Many individual acts of mobbing and violence towards blacks was common. In 1963, organizer Medgar Evers was assassinated in Mississippi, and four children were killed in the bombing of a black church in Birmingham, Alabama. The following year the Freedom Summer campaign was accompanied by many attacks and murders, which drew worldwide condemnation and the disgust of northerners.

The Civil Rights movement reached its peak between 1963 and 1965. In 1963 the symbolic focus shifted once again to Birmingham, Alabama, which saw concentrated mass protest against segregation laws. The protest turned ugly that May, when police used brutal violence against protesters. This event was shocking in its own right, but was also one of the first times that television cameras broadcast these images to the rest of the world within hours. The images of southern police turning dogs and water-cannon on black children sparked even more international outrage which completely smashed the US's image in the rest of the world as a defender of democracy and Liberty in the face of communist tyranny.

August 1963 brought a mass march in Washington, at which King delivered his famous 'I have a Dream' speech. The aim of this march was to pressure Congress to move on Kennedy's Civil Rights bill. Following Kennedy's assassination, Lyndon Johnson took up the pressure to move the legislation along. It was passed as the Civil Rights Act of 1964 and it prohibited any racial segregation in public facilities and prohibited discrimination employment on the basis of religion, creed, race, or ethnic origin.

Regarding voting rights, black voters in Alabama and Mississippi were widely excluded from the vote by various non-racial voter tests and poll taxes, and only a federal law could permit blacks to secure their gains by a long-term restructuring of the political system. Once again, the measure was obtained in direct response to southern repression, this time with 'Bloody Sunday' at Selma, Alabama which happened in March. By August 1965 the United States passed the Federal voting rights act, the consequences of which would reshape Southern politics. With millions of blacks now enfranchised, President Johnson also recognized he was giving away the Democratic 'Solid South' to pass to the Republican Party for at least a generation.
Retrieved from "https://en.citizendium.org/wiki?title=Civil_Rights_Movement&oldid=100754889"
Categories:
Hidden category: