Antulio Echavarria disputed some of this definition, mentioning that "a closer look at the German text shows that Clausewitz never used the term “source” (Quelle). Moreover, the concept remains valid only where the enemy possesses sufficient “unity” or “interdependence” (Zusammenhang) to act as a single body. Before applying the concept in war planning, therefore, we must ask ourselves whether we can consider the enemy to act as a single entity."

To consider the enemy (or an enemy system) to be a single entity, it is necessary to determine the key parts of the enemy system, the interconnections among them, and the available means producing effects to disturb the parts or connections. If CoGs are points at which the system can be disrupted, then finding them requires looking "... for connections among the various parts of an adversary, or adversaries, in order to determine what holds them together." CoG-oriented attack is most relevant in a total war.

Using this approach means that neutralizing targets must have a clear effect on the overall course of the war; Clausewitz did not distinguish among tactical, operational, and strategic levels. The CoGs must be engaged wherever they exist, which could be locally, regionally, or globally.

The Air Force drew its interpretation from COL (ret.) John Warden III, who adapted the idea of centers of gravity to the planning of air campaigns[2] especially Operation Desert Storm in 1991. Warden interpreted the CoG as a useful concept "in planning war operations, for it describes that point where the enemy is most vulnerable and the point where an attack will have the best chance of being decisive. The term is borrowed from mechanics, indicating a point against which a level of effort, such as a push, will accomplish more than that same level of effort could accomplish if applied elsewhere. Clausewitz called it the "hub of all power and movement."

Warden disagreed with Echavarria: "Every level of warfare[3] has a center, or centers, of gravity. If several centers of gravity are involved, force must be applied to all if the object is to be moved. Perhaps the most important responsibility of a commander is to identify correctly and strike appropriately enemy centers of gravity. In some cases, the commander must identify specific reachable centers of gravity, if he has neither the resources nor the authorization to act against the ultimate centers. In any event, theater operations must be planned, coordinated, and executed with the idea of defeating the enemy by striking decisive blows."

What must be struck decisively? Is it an example of what has been called a "strategic target", especially by nuclear war planners? Are such targets now vulnerable to advanced conventional weapons or forces? Precision-guided munitions, up-close-and-personal action by special operations forces, electronic attack, etc., all offer the potential of defeating an enemy without having to beat down his entire system.

One of the key questions of modern strategy is whether the claim of air power advocates of the past, which they were unable to demonstrate, is now true: air power can be decisive. Warden, in his work prior to Desert Storm], said that it was sometimes true that air, sea, and ground power were all needed, but that there are historical examples where only one was decisive. Of course, prior to the 20th century or even the limited use of observation balloons in the mid-19th century, there could be only two. Without using air warfare examples, he observes that Alexander the Great used land power to win his war with Persia by destroying Darius' shore bases for his fleet, and that the British Royal Navy won the war with Spain by defeating the Spanish Armada with sea power.

On the other hand, the German air force, the Luftwaffe, failed to destroy the forces evacuating from Dunkirk, and horizontal bombers, touted as the end of navies by Billy Mitchell, were virtually useless against Second World War warships. The latter point changed with the German introduction of the Fritz-X rocket-boosted armor-piercing weapon, which sank the Italian battleship Roma.

Warden's concepts map to the doctrine of effects based operations. "Effects-based targeting is identifying and engaging an adversary's key capabilities in the most efficient manner to produce a specific effect consistent with the commander's objectives. The underlying concept, therefore, posits it is possible to direct airpower against targets in ways that cause military and political effects beyond the mere destruction of those targets. Airpower may still seek to destroy targets, but destruction is only one effect within a spectrum of desired options. More typically, it is a first step en route to subsequent, more highly desired effects. Consequently, effects-based targeting adherents view destruction primarily as a means and rarely as an end in itself. The aim of effects-based operations lies in using target destruction (or some other effect via nonlethal technology) to generate predetermined second-order effects at the operational and strategic levels of war, which, in turn, compel enemy decision makers to respond in ways favorable to our overall campaign objectives.[4]

Perhaps terrorist organizations best understand effects-based operations. The attacks on 11 September 2001 had less to do with selected targets and more to do with the causation of synergistic effects. [5] Effects based targeting, without prejudging the number of levels of warfare involved, requires identifying Center(s) of Gravity (CoGs) and subsequently identifying Decisive Points (DP) and the associated targets that, if serviced will achieve the desired effect.
File:EffectsBasedTargeting.gif
Relations between the desired End State, Centers of Gravity, Decisive Points and targets at the tactical, operational, and strategic levels

Milan Vego, Professor of Operations in the Joint Military Operations Department at the United States Naval War College, is highly critical of EBO. [6] "Effects-based operations (EBO) are a spin-off of network-centric warfare (NCW). Hence, many of its premises are largely unproven, if not outright false. EBO and NCW proponents essentially see war as a business." While EBO uses Clausewitz's terminology, Vego sees them not sharing Clausewitz's true views, and are using "a deeply flawed systems approach for assessing situations and identifying centers of gravity."

Vego observed that while EBO was originally focused on measurable results that map to effects, but the EBO proponents, increasingly "appear to infer causality in a deterministic way, without quantifying." In Vego's article in Combined Arms and Joint Operations, D.H. Gurney, in a sidebar, notes that "United States Joint Forces Command has been developing this concept for over 5 years, and, to the same degree as the Standing Joint Force Headquarters established in each of theregional combatant commands, integration and application vary widely. While this may be considered normal for military cultural evolution, EBO is especially thorny because of its work force demands and complexity, which even U.S. Joint Forces Command’s Joint Warfighting Center admits to being “convoluted."

Gurney said EBO has continued to be no more than a concept from which doctrine can be derived. "Joint Doctrine, bound by a paradigm that limits doctrinal treatment to extant capabilities, has introduced the idea of effects and an effects-based approach to planning and assessment in mature revision efforts to key publications (Joint Publications 3-0 and 5-0). It has addressed the construct as “small letter” variants, far short of the larger EBO construct. The point of selecting Professor Vego’s critique is to elevate debate and encourage adaptation."

At the most basic, effects are direct or indirect. A direct effect might be shooting down an aircraft in combat. An indirect effect could be bombing the source of fuel to that airplane's base, so the aircraft cannot refuel and operate. To achieve the indirect outcome, it might be necessary to attack multiple refineries, pipelines, or other redundant ways of providing the critical resource.

Effects also can be classified as:

Combat assessment (CA) is an overall evaluation of combat operations in relation to command objectives, using this taxonomy of effects. It evaluates three subordinate taxonomies:

Though an airman, Boyd was not an airpower theorist and in fact was little concerned about how to design an air campaign or a strictly air war. Boyd’s concern was the nature of human conflict, the strategy and "grand tactics" writ large, not particular service approaches per se. He jumped from the tactical experience of air-to-air combat and proceeded to think about how to conduct different types of wars."[7]}}

Boyd's key concept was that of the decision cycle or OODA loop, the process by which an entity (either an individual or an organization) reacts to an event. According to this idea, the key to victory is to be able to create situations wherein one can make appropriate decisions more quickly than one's opponent.

Boyd theorized that multilevel contexts, such as the tactical, operational, and strategic levels of war, can be modeled with a hierarchy of OODA loops (see below). He also argued that fast OODA loops require a highly decentralized chain of command using objective-driven orders, or directive control, rather than method-driven orders in order to harness the mental capacity and creative abilities of individual commanders at each level. He argued that such a structure would create a flexible "organic whole" that would be quicker to adapt to rapidly changing situations. He noted, however, that any such highly decentralized organization would necessitate a high degree of mutual trust and a common outlook that came from prior shared experiences. Headquarters needs to know that the troops are perfectly capable of forming a good plan for taking a specific objective, and the troops need to know that Headquarters does not direct them to achieve certain objectives without good reason. [7]

The OODA model of decision and action, originally for air-to-air fighter combat, has four phases:

After the action, the actor observes again, to see the effects of the action. If the cycle works properly, the actor has initiative, and can orient, decide, and act even faster in the second and subsequent iterations of the Boyd loop.

Eventually, if the Boyd process works as intended, the actor will "get inside the opponent's loop". When the actor's Boyd cycle dominates the opponent's, the actor is acting repeatedly, based on reasoned choices, while the opponent is still trying to understand what is happening.

While Boyd treated his cycle as self-contained, it is reasonable to extend it to meeting the intelligence cycle. Observation can be an output of the collection phase, while orientation is an output of analysis. 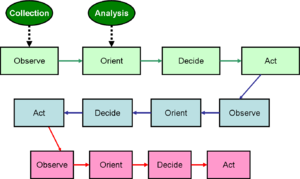 Eventually, actions taken, and their results, affect the senior commanders. From the commanders, rather than the intelligence side, come guidelines on the preferred decisions and actions. 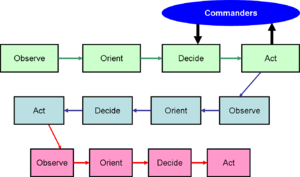 Interactions between command and the Boyd loop

Another contribution by Boyd was the recognition that quantity has a distinct quality of its own. He was a major proponent of the "high-low" mix and of the "lightweight fighter mafia"; he was a champion of the lighter, more affordable F-16 Fighting Falcon as a complement to the more capable F-15 Eagle.