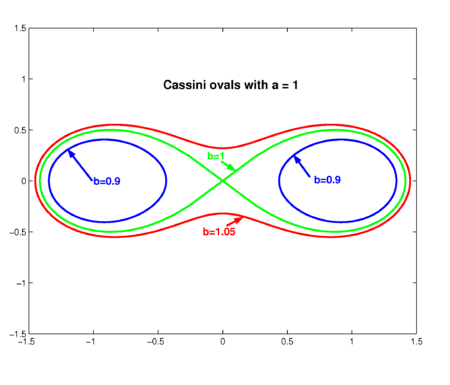 PD Image
Three Cassini ovals. The oval with b=1 is a Bernoulli lemniscate.

A Cassini oval is a locus of points determined by two fixed points F1 and F2 (the "foci") at a distance 2a apart (in the figure the foci are on the x-axis at F1,2 = ±1). If the distance of a certain point in the plane to F1 is r1 and the distance of the same point to F2 is r2 then the locus is defined by the product of distances r1×r2 being constant and equal to b2.

The shape of the curves depends on the ratio b : a. If b > a, the curve is a single loop (red curve in the figure)—a dog bone. The case a = b produces a lemniscate of Bernoulli (green curve). The case b < a gives two disconnected ovals (eggs).

The Cassini ovals are a family of quartic curves, also called Cassini ellipses. They were introduced by Jean-Dominique Cassini (1625–1712), a French-Italian astronomer, who studied them as a possible alternative for the Kepler elliptic planetary orbits.[1] They did not appear in print until Cassini's son Jacques (1677-1756) published the Eléments d'Astronomie in 1740.

If one takes the foci on the x-axis at ±a, the family of loci is given by

Without loss of generality one may take a as a new unit of distance (rescaling). Then the equation may be written as

The equation may be cast in a slightly different form, the Cartesian equation of the Cassini oval,

Whence the polar equation of the Cassini oval is,

A few words about plotting the Cassini ovals may be useful.

The polar equation is a quadratic equation in r2. It has real roots if the discriminant D is positive or zero,

The case b < 1 requires a different approach. If one looks at the figure (at the "eggs") one sees that there is range of x-values on the positive axis and a mirror range on the negative x-axis where the function is defined. The boundary points x0 of the ranges are given by y = 0 (where the ovals cross the x-axis). Introducing y = 0 into the Cartesian form one derives easily (and remember b2 < 1)

If one restricts x to these two intervals, a positive and negative y-value can be solved for given x from the Cartesian equation. In this way one obtains y as function of x and a graph may be plotted.