U.S. Navy Burke-class destroyers are one of the few ship classes named for a living individual, Admiral Arleigh Burke. Burke (1901 - 1996) was a legendary World War II destroyer commander, who rose to become the youngest Chief of Naval Operations. He attended the dedication of the first ship of the class. Somewhat ironically given Burke's record against the Japanese in WWII, Japanese Kongo-class destroyers are authorized copies of Flight I Burkes, being upgraded for area ballistic missile defense (BMD) capability

Like most modern naval vessels, the Burke class, of 63 ships, follows a "spiral" development model. The first series was called "Flight I", and, while the most recent are "Flight IIA", there have been several significant "sub-flight" enhancements; see variants. 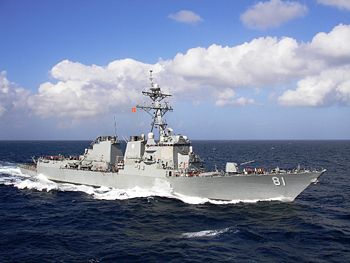 These are not small ships; their displacement is more typical of a World War II light cruiser. All ships of the class share being multirole vessels built around the AEGIS battle management system, and having a principal weapons system of vertical launch system (VLS) missiles as well as secondary armament. They are built around the AN/SPY-1D radar; they do not have the secondary extra-long-range AN/SPS-49 radars of the Ticonderogas.

In a reversion of traditional doctrine of destroyer vs. cruiser; the Burkes have more Kevlar armor and radar signature reduction, as well as all-steel construction, than the Ticonderogas. The rationale is that Burkes are more likely to take damage on independent or outer picket missiles, and the Ticonderogas, either close escorts to high-value assets or surface action group leaders, can fire the Burke's weapons using the Cooperative Engagement Capability.

Many of the additions, especially of electronics, have been retrofitted to earlier versions. This table shows the ships in which a feature first appeared. Like the Ticonderogas, AEGIS has its own spiral improvement program.

As seen above, there are variations and retrofits.