Blue Force Tracker (BFT) is a U.S. military command and control system, built by Northrop Grumman, based on the Force XXI Battle Command Brigade and Below (FBCB2) soldier- and vehicle-level workstations, but going beyond the limitations of FBCB2 and systems of similar vintage. It also complements networks used for combat service support (CSS) functions such as supply and maintenance. The two systems are most significantly limited by the range of two networks: the UHF Enhanced Position Location Reporting System, which transfers low-speed data and Global Navigation Satellite System (GPS) position and time information, and the VHF/FM SINCGARS radios used for voice and low-speed data within battalions and brigades. While it is jam-resistant, it is not encrypted and not authorized for classified information.

The end user equipment encompasses all FBCB2 equipment, and goes beyond it. User terminals go from palmtops, to ruggedized laptops, to stations built into tanks and helicopters, to larger displays for command posts.

Even before the restructuring of the United States Army from a division to a brigade oriented force, significant limitations were showing in combat service support (CSS). CSS functions often needed to operate beyond the division's area of responsibility (AOR) and its radio systems, for fundamental reasons such as getting parts and fuel from rear depots. [1]

BFT gives range extension to both tactical systems. Nevertheless, it still has limitations. In particular, the basic BFT updates information every five minutes, which increases the chance of fratricide when units are in close contact, or if BFT data is being used to direct artillery fire. A new version, expected to reach the field in 2010, updates every 10 seconds, and also allows soldiers and marines to exchange electronic mail and Microsoft Word documents. BFT2 communicates through the commercial INMARSAT IV satellite; the terminals cost $2500 rather than the $1600 of BFT1. [2] 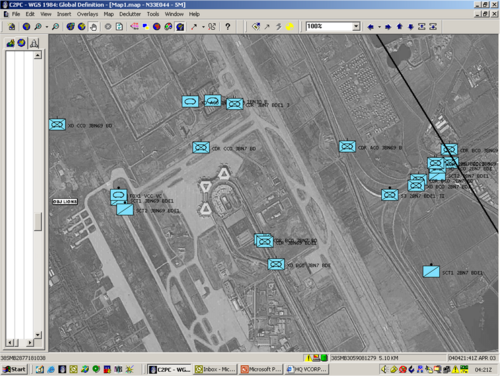 Version 1 BFT provided significant improvements to situational awareness in the Iraq War. [3]At the division level, "The V Corps common operational picture was 90% BFT. BFT was one of two resounding successes for OIF because commanders down to Brigade level were able to track combat maneuver units in near real time." 3rd Infantry Division said “The single most successful C2 system fielded for OIF was the FBCB2-BFT system…BFT gave commanders situational understanding that was unprecedented in any other conflict in history”[4]

While BFT now uses commercial satellites, the intention is to bring it under Warfighter Information Network-Tactical, to make a much wider range of communications facilities available.

One limitation of BFT in urban areas is that GPS will not always penetrate into buildings. The soldier wireless local area network of the intra-squad radio, however, may provide connectivity, since anyone in the squad who can receive the GPS information can propagate it to the rest of the network. It will be no more accurate than the position of the person receiving, but that is much better than no position.