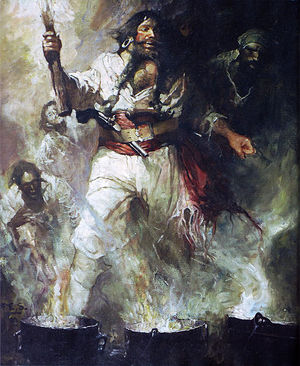 Blackbeard in Smoke and Flames

Edward Teach (circa 1680-22 November 1718), better known by his sobriquet Blackbeard, was an English pirate operating around the West Indies and the eastern coast of the American colonies. He was probably born in Bristol, England and been a sailor on privateer ships before meeting pirate Captain Benjamin Hornigold, who Teach joined sometime around 1716 to command a sloop. Teach later captured a French merchant vessel, renamed her Queen Anne's Revenge, and equipped her with 40 guns. 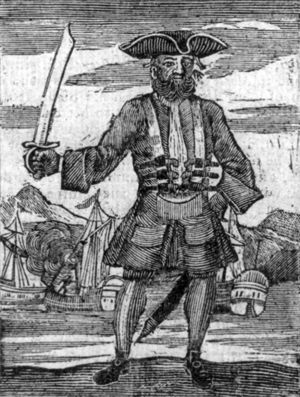 He became a renowned pirate, his sobriquet derived from his thick black beard and fearsome appearance. He formed an alliance of pirates and blockaded the port of Charleston, South Carolina. A shrewd and calculating leader, Teach commanded his vessels with the permission of their crews and there is no known account of his ever having harmed or murdered those he held captive. He was immortalised after his death and became the inspiration for a number of pirate-themed romanticised works of fiction across a range of genres.