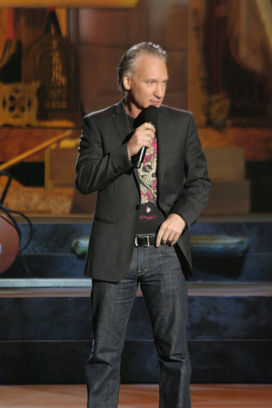 Maher also hosted the show Politically Incorrect on ABC but due to the controversy sparked by a comment pertaining to the September 11th terrorist attack the show was canceled.

He is noted for his caustic and outspoken style. His guests included figures from different positions on the ideological spectrum, such as former Vermontese governor Howard Dean, conservative pundit Pat Buchanan, and military commander Gen. Wesley Clark.

Maher was born in New York, but grew up in New Jersey. He attended the Cornell University and began his career as a comedian in a Chinese restaurant. He then performed in various television shows and sitcoms. In 1993, the channel Comedy Central granted him to host Politically Incorrect', which was exceptionally successful. In 1997 the show was moved to ABC.

In September, 2001, after the tragic September 11th terrorist attack Maher made a comment arguing that the the American troops who launch missiles to terrorist camps exhibited more cowardice than the terrorists. The comment was seen as controversial. Many companies pulled their advertisement from the show and Maher was denounced by the White House Secretary Ari Fleischer. ABC canceled the show under immense pressure.[1]

Bill Maher describes himself as a libertarian,[2] and supports libertarian positions such as privatization of Social Security and legalization of marijuana. On foreign policy he was a staunch opponent of the policies of President George W. Bush, especially on the War in Iraq. However, his commitment of libertarianism has been questioned and criticized by some for inconsistency.[3] In 2009, Maher has advocated strongly against large corporations like Citibank and Bank of America and in support of Barack Obama's healthcare reform plans, including the plan for a public option.

Many skeptics, atheists and secularists have widely criticised Maher's take on medicine, alternative medicine, vaccination and the pharmaceutical industry, especially since Atheist Alliance International announced that Maher would receive the Richard Dawkins Award for his movie Religulous. Maher claims, rather paradoxically, that vaccines for things like influenza do not work, but then criticises the movement of people who oppose the human papilloma virus vaccine Gardasil, and also makes claims about the success of alternative treatment in cancer treatment compared to conventional medicine[4]