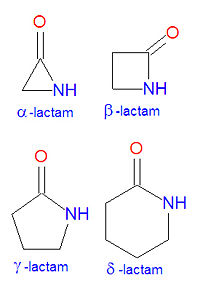 In chemistry, a lactam is a cyclic amide. The name is derived from two chemical terms, lactone, referring to a cyclic ketone, and amide, a compound containing a nitrogen atom next to a carbonyl group. Lactams are named according to the size of the cyclic ring in the lactam:

-lactams are also called aziridinones. Many widely used antibiotic drugs, including the penicillins and cephalosporins, owe their activity to the presence of a

-lactam structure. The lactams may have substitutions added to the nitrogen atom or any of the non-carbonyl carbon atoms in the base structure.

The cyclization reaction of an

-haloamide precuror in the presence of sodium hydride and 15-crown-5 ether at room temperature in dichloromethane (CH2Cl2) is a high-yielding, general route to 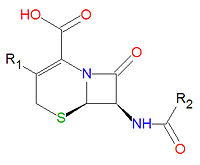