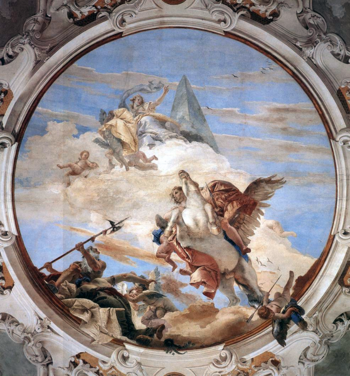 (PD) Painting: Giovanni Battista Tiepolo
Bellerophon on the winged horse Pegasus killed the fire-breathing monster Chimera by creative use of a fact from metallurgy.

In Greek mythology, Bellerophon was a hero who slayed the Chimera which had the head of a lion, with a body of a goat, and had a tail looking like a lizard or serpent. Like many heroes such as Achilles and Heracles, he dealt with one of the ultimate problems of Greek tragedy, which was the character flaw of hubris or excessive pride, and in the end he paid for his flaw with the loss of his own life.

There are different variants of the story of Bellerophon, but many share common details, and the general outline of the plot is the same, although particular details change in different versions.

Bellerophon was descended from Sisyphos (who went to Tartaros for leading a bad life.) His father was a king named Glaucus from the city-state of Corinth. Bellerophon was an honorable man, and very beautiful as a young man, and he attracted the romantic interest of a married woman named Antea. But he rejected these advances. But in exchange, Antea made up lies about him which had the effect of causing Bellerophon to go on a series of adventures.

The gods made Bellerophon so beautiful
and gave him the best qualities of men.
But Proetus, in his heart, plotted against him,
driving him from Argos, being much stronger,
for Zeus had given royal power to Proetus.
Now, Proetus' wife, lady Antea,
desperate to have sex with Bellerophon,
wanted him to lie with her in secret.
But fiery Bellerophon refused,
for he possessed an honourable heart.
So Antea made up lies, telling Proetus,
the king, 'You'll be murdered, Proetus,
unless you assassinate Bellerophon,
who wants to have sex with me against my will.'
Proetus was overcome with anger
at what he'd heard, but he was reluctant
to kill Bellerophon—in his heart
he shrank from doing such an evil act.
He sent Bellerophon to Lycia,
with a lethal message, coded symbols
inscribed on a folded tablet. These told
many lies about Bellerophon.
Proetus told him to give the message
to his father-in-law, so he'd be killed.[1]

Note: the original Iliad was written in Greek in a poetic meter known as dactylic hexameter, but this translation into English does not use this style. It's difficult to adapt this particular meter to English, according to Classics scholar Elizabeth Vandiver.

So King Proteus sent Bellerophon away, falsely, under the suspicion that he had tried to seduce his wife Antea, when in fact the seduction had been in the opposite direction. He went to Lycia where he met King Iobates bearing a message, and the message urged the king to kill his guest Bellerophon. This literary device has been used in stories throughout storytelling, sometimes in revised formats. In an alternative version of this story, Proteus, jealous of the handsome youth Bellerophon, without any lies from Antea, sent him to Iobates with the dreaded bellerophonic letter requesting the reader to kill the young man.

Iobates got Bellerophon, plus a letter advising that Bellerophon be killed. But Iobates didn't want to make the gods angry with him for violating a basic rule of Greek culture––not to treat guests badly.

It was part of the Guest-host relationship which was particularly valued throughout all of Greek culture, and enforced strictly by Zeus. In fact, in other instances, when a guest harmed a host, such as when Paris abducted the wife of King Menelaos of Sparta, this was an act of violence against the guest-host relationship, and it had the effect of turning Zeus against the Trojans in the ensuing decades-long conflict known as the Trojan War. In an example from the Odyssey, suitors entered the house of King Odysseus when he had been away fighting in a war, and stayed there longer than necessary, consuming the household supplies while courting the king's wife, Queen Penelope of Ithaca; later, when Odysseus returned, the suitors were slaughtered. 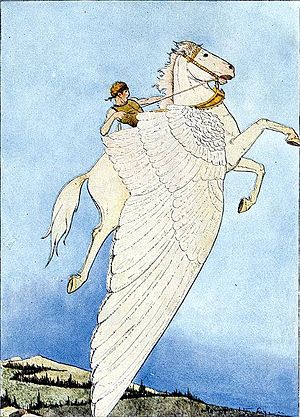 So, what was Iobates to do? So he sent Bellerophon on an adventure with tremendous risks, specifically, to kill the Chimera. It breathed fire and was dangerous. But the young hero got help from the goddess Athena who gave him a winged horse named Pegasus. Bellerophon became a skilled horseman and cavalryman, and learned how to ride Pegasus and fight at the same time. In a different version of the story, Bellerophon learned about the special horse by consulting the wise man Polyidus who told him to sleep in the temple of Athena; in a dream he saw the winged horse, and woke up to find a golden bridle. Bellerophon sneaked up on Pegasus while it was drinking water from the well named Pirene on the Acrocotinth. With the bridle on, Pegasus belonged to Bellerophon.

Bellerophon, on Pegasus, flew to the monstrous Chimera who expelled hot blasts of air from a great distance, similar to the fire-breathing dragons of the Middle Ages mythology. He couldn't get close enough to kill the monster with a spear. But then he got the idea of putting a large chunk of the metal lead at the tip of his spear. He attacked and got the lead into Chimera's throat. This turned Chimera's advantage against it, because when the monster breathed fire, it caused the lead to melt in its own mouth, which caused suffocation and death. Chimera was no more. The mounted hero returned to a surprised Iobates, who insisted that the returning hero marry his daughter Philonoe. In one story, Bellerophon and Philonoe had an affair. In a different version of the story, Antea wasn't a wife of a king, but another daughter of Iobates who was in love with Bellerophon but who committed suicide when he scorned her advances. While there isn't much written about Philonoe, one version suggested she died young, while another suggested she became immortal with the help of the goddess Artemis.

ut over time, as a result of increasing fame, Bellerophon believed he could fly anywhere, even to Mount Olympus. This angered the gods who did not like a human to be so arrogant. Pegasus was tired from flying to such heights, and the gods punished them by sending a fly to sting the winged horse, causing Bellerophon to fall to his death. In a different version, Pegasus lost his footing, but Bellerophon falls and becomes crippled. In either case, the hero was punished for his excessive pride or hubris.