In the Vietnam War, the Battle of Bong Son was the second major battle for an airmobile unit of divisional strength. the "First Cav". It also was called Operation IRVING, and involved the start of frequent combat in an area called the Iron Triangle. A month earlier in 1965, in the Battle of the Ia Drang, the Cav used all the division infantry, but one brigade at a time. One of the realizations that affected Bong Son was that with adequate helicopter lift, the traditional need to keep a strong reserve was less required -- the least involved unit usually could break away and go where it was needed. 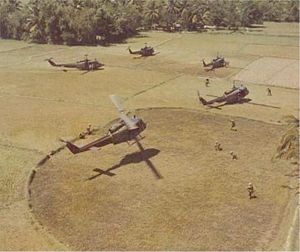 Troops landing in the valley

At the operational level, it was began as a pursuit of the PAVN 2nd, 18th, and 22nd Regiments (forming the NVA 3rd Division) by the ARVN 22nd Division, commanded by BG Nguyen Thanh Sang and assisted by the Republic of Korea Capital Division. The NVA fought back strongly, and Sang asked for reinforcements by two ARVN airborne battalions, which still were not enough. [1]

During the Battle of the Ia Drang, 1st Cav commander MG Harry Kinnard had considered operations on the Binh Dinh plain, part of the area involved in Bong Son. He now had time to implement those ideas, with Hal Moore as the principal operational brigade commander. Even through the ARVN needed help, the Cav prepared systematically.

Ia Drang demonstrated the fundamentally new capabilities, as well as the liabilities, of large, well-integrated airmobile forces, and Kinnard wanted to apply the lessons learned. It was planned as a divisional operation, rather than as the more reactive operations at Ia Drang in September and October 1965. Rather than troop movement alone, the division staff dealt with psychological operations and civil action, not only protecting the 250,000 civilians, rice farms, and salt production in the area, but, with the controversial "hearts and minds" approach that Westmoreland tended to dismiss, extensive steps were taken to deal with both the enemy and the potential friends.

"Some twelve million leaflets and 150 radio broadcast hours were used during Operation IRVING to help control the civilians. Curfews were established, and at times villagers were requested to stay where they were until more specific instructions were given. Psychological efforts were also geared to appeal to the enemy. For example, substantial rewards were offered for surrendered weapons. [2]

Binh Dinh province stretches from the mountains to the seacoast of Vietnam. It is full of contrasting terrain, and today is an important area of tourism in Vietnam. [3] The same geography that makes it a tourist attraction made it a key transportation nexus during the Vietnam War, linking Nha Trang, Pleiku, Hoi An, Da Nang and Hue, and providing access for the now-historic Ho Chi Minh Trail through Vietnam, Laos, and Cambodia.

That the area had coast on the South China Sea allowed Naval fire support to be added to the three allied national forces. ARVN junks and the U.S. Navy sealed escape routes to the sea and provided fire support from the destroyers USS Hull and USS Folson and smaller ships. [2]

A local VC unit, the 2nd Regiment, had been reinforced by the 18th PAVN regiment; they operated in a plain near the Dam Trao lake. Also in this area was the deep Kim Son and An Lao valleys. The Communist regiments had struck at Sang's command from the valleys, and were driving him back into defensive positions.

Kinnard looked at the geography of the Bong Son plain, and saw the United States Army Special Forces camp and airstrip at Bong Son as a natural place to insert the Cav, which could then move to any of four geographical areas. He knew that a pressed PAVN battalion or regiment would itself move if threatened, and counted on it doing so, planning to use "hammer and anvil" tactics to start the enemy moving, when they would be easier to detect, and to drive them into ambushes.

Colonel Hal Moore, now commanding the 3rd Brigade of the Cav, secured Bong Son, and then probed at the enemy, opening his serious operations on January 28. He had established base "Dog", on high ground along Highway 1. With as much stealth as possible, he moved part of his command into blocking positions at the north end of the plain. The plan was for Moore's forces in the valleys, along with ARVN units to "encourage" the Communists to fall back, into the ambushes.

Weather, and having a howitzer-carrying helicopter shot down on January 29, started the fight somewhat prematurely. The weather broke, however, and now that the enemy had been located by fighting with the fire bases, Moore's three battalions attacked the 22nd regiment from three directions.

As this four-day fight wound down, Kinnard moved the 2nd Brigade into the mountains at the An Lao valley, the 3rd Brigade at the South end, where they were covered by artillery. U.S. Marines pressured the enemy force in the valley, while Sang blocked the exists. This operation was of limited effect, as the enemy had moved into the jungle and mountains.

A reinforced battalion made a night air assault on the beaches east ofHoa Hoi and moved into the encirclement, with illumination from an AC-47 gunship, artillery, and the destroyer USS Ullman. The enemy was hit heavily by 105mm artillery fire from the Cav's helicopter-lifted howitzers, and helicopters operated at night in fire support, supply, medical evacuation roles. A B-52 strike also was made on the suspected 2nd Regiment command post, with limited results, [2]

On February 10, however, the 1st Brigade (Archie R. Hyle, commanding) flew from An Khe into the Kim Son valley, where Moore's brigade implemented an idea he had been planning since October.[4] He flew an air assault onto the valley floor, only after company-size ambush forces were astride the exists some the valley. Contact was made with Communist forces on every one of the escape routes, and they took casualties both from the ambushing companies and the prepared artillery, the latter including heavy, long-range artillery moved by road into the area.

A captured VC battalion commander talked enough about his unit for Kinnard to find the 2nd regiment headquarters, in an area that became known as the "Iron Triangle". 2nd Brigade (COL Ray Lynch, commanding) of the Cav committed to this area, and fought a two-week battle, along with Moore's 3rd Brigade.

After 41 days of fighting, the U.S., RVN, and Korean forces had maneuvered in a complete circle around Bong Son, breaking up the 3rd NVA Division. Sang's ARVN division was able to move back in and take control of the plain.

The major tactical innovation illustrated in Operation IRVING Was airmobile combat. An airmobile operation is one in which combat forces and their equipment move about the battlefield in aircraft to engage in ground combat. In such an operation, helicopters not only transport the forces to the battle area, but also enable them to develop the situation and to reinforce, withdraw, and displace combat power during the battle. The purpose of an airmobile assault is to position fresh combat troops on or near-their tactical objectives. The tactical unit can fly over obstacles and impassable terrain to land at the strategic point in the battle area. — LTG John H. Hay Jr.

Hay observed that Bong Son involved new levels of complexity in planning and coordination. He described the ideal planning sequence being quite different than used by ground units:

In the formal after-action report, [5] it was observed that since good intelligence of VC unit locations is difficult to obtain, the force must be able to respond quickly to spot reports. A more deliberate approach recognizes that "the enemy will not generally stand and fight when faced by a superior force aggressively employed, preferring to fade away into the bush in classic guerrilla fashion." To forestall this classic move, his escape must be predicted, and ambushes placed; it is as important to block his escape routes as to directly attack his force.