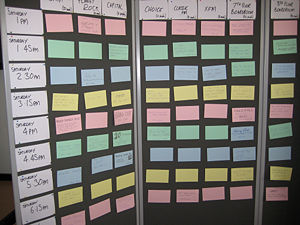 BarCamp is a network of free technology unconferences organized on the Internet. The first BarCamp was organised in Palo Alto, California, in August 2005, as a response to O'Reilly's invite-only FooCamp. The BarCamp concept has spread across the whole world, and spin-off camps have started on a variety of topics. The sessions given are not pre-planned - rather, the schedule is determined when the event starts as people add sessions to a board.

The WordPress blogging software has led to WordCamp, the PHP content management system Drupal has spawned DrupalCamp, JavaCamp for users of the Java programming language, RailsCamp for Ruby and Rails developers, PodCamp for podcasting, the Semantic Web community has SemanticCamp and VoCamp, the startup community has DemoCamp. Some BarCamp organisers have setup events for non-technical topics - TransitCamp is an event where people discuss public transport systems and try to make them better, HeroCamp tries to get those with technical skills to volunteer in education and other public roles. There have been some 'dev' camps for developers - LinuxDevCamp and iPhoneDevCamp.