each of these phases presents unique challenges for interception of the missile or its warhead. Some BMD systems, recognizing the complexity of each phase, may "layer" defenses, combining, for example, midcourse intercept with terminal defense against those warheads not destroyed in midcourse. In the terminal defense phase, there may be interceptors optimized for engagement at different altitudes.

Some BMD, such as the U.S. Navy RIM-161 Standard SM-3, also have anti-satellite missile capabilities, although there also have been systems declared to be antisatellite alone,[1] or having no plausible BMD role. [2] BMD divides into two major classes: 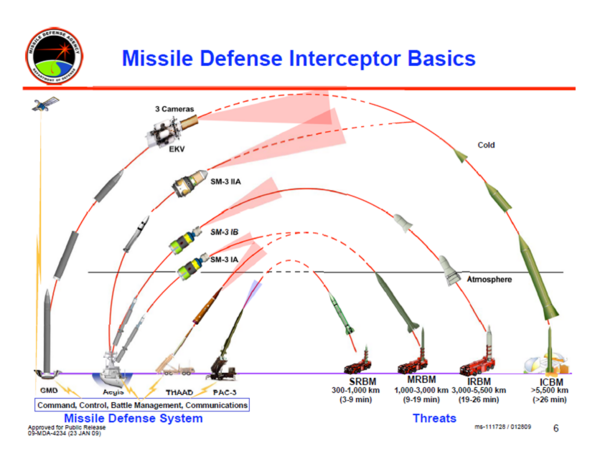 Early BMD interceptors had nuclear warheads; the Russian 53T6 GRIFFON and possibly 51T6 GAZELLE still do, but no recently designed system uses them. Nuclear warheads have been rendered impractical due to bans against testing in the atmosphere and space. Improvements in guidance also makes the large area of effect of a defensive nuclear burst unnecessary; the kill mechanisms of current systems are either kinetic (i.e., direct collision with the warhead) or directed energy (e.g., laser heating of the warhead). Some endoatmospheric ABMs do use explosive warheads.

Mechanisms to destroy enemy missiles are not limited to anti-ballistic missiles, although those are the most common that have been deployed. Directed energy weapons, especially lasers, are under active development. Autocannon have been proposed for terminal defense of point targets, and may be of increased interest against very short range missiles and unguided rockets, as, for example, on the borders of Israel.

Sensors are not strictly theater or national. During the Gulf War, for example, U.S. space-based infrared satellites, intended to detect ICBM launches, routinely warned of SS-1 SCUD firings, with tactical warning to the theater in 1-2 minutes.

The U.S. has a network of ground, sea, and space based sensors, using radar and electro-optical technologies. Forward-deployed sensors in allied countries also can feed into the system.

There are two classes of space-based infrared sensors for BMD, launch detectors in high or geosynchronous orbit, and flight tracker constellations. The first class, exemplified by the US Defense Support Program (DSP) has been in use for decades, if only for strategic warning. Evolved DSP sensors provided useful SCUD launch warning in the Gulf War.

US low-altitude systems have gone through a series of names, with the most recent (2002) variant the Space and Missile Tracking System.[3]

Originally intended for intelligence rather than warning, RC-135 COBRA BALL aircraft can characterize the launch of missiles. While there were originally only two such planes, the instrumentation has been made interchangeable between the COBRA BALL and RC-135 RIVET JOINT signals intelligence aircraft.

Radars on theater-level platforms include the shipboard AN/SPY-2 (intended for RIM-161 Standard SM-3) and the U.S. Army AN/TPY-2 (intended for THAAD). It must be emphasized that both types feed tracking information into an overall command and control system. There are AN/TPY-2 installations in locations without colocated THAADinterceptors, such as Japan and Israel.

These longer-range radars can cue the engagement radar on MIM-104 Patriot, and probably the joint US-Israeli Arrow.

An airborne laser, flown in a Boeing 747 cargo aircraft, is an experimental boost phase interceptor. While there have been some successes, the program has been cut back to a single aircraft. The basic problem is that it requires a large, unmaneuverable aircraft to operate near the launch site, which is apt to be heavily defended. This may be practical in special cases, such as over the Sea of Japan against the coastal North Korean launch site, but it is unlikely the aircraft could be protected near Iran or the India-Pakistan border.

NCADE, which can be launched from maneuverable fighters or even unmanned aerial vehicles, seems more survivable as an airborne boost phase interceptor.

In advanced development, the NCADE system is intended for boost-phase intercept. It is modified from the AIM-120 AMRAAM missile and potentially can be fired from any of the wide range of aircraft that already have the AMRAAM as an air-to-air missile. The F-15 Eagle radar specifically supports it, but it is primarily a software problem to adapt other radars for it.

While the U.S. Navy RIM-156 Standard SM-2 is too slow to intercept warheads in midcourse or terminal phases, it has some capability against the slower boost phase. Ships equipped with it, especially in task groups, have considerable self-defense capability.

The U.S. Navy RIM-161 Standard SM-3 Block IA has demonstrated anti-satellite as well as ABM capability. It is fired from Ticonderoga-class cruisers and Burke-class destroyers equipped with the AN/SPY-2 enhancement to the AEGIS battle management system. Japan is also acquiring this system for use on their Kongo-class destroyers, which are licensed copies of Burkes.

Israel is considering adapting SM-3 as a land-based system with greater range than THAAD, and a land-based SM-3 would have potential in Eastern Europe and elsewhere.

A U.S. Army system, THAAD is higher-altitude than Patriot. Israel and Japan do have the AN/TPY-2 tracking and control radar for THAAD, which is transportable and has been deployed to Japan, Korea and Eastern Europe. The system has been sold to the United Arab Emirates. [4] Japan has bought the AN/TPY-2 radar and is considering the THAAD missile. [5]

Jointly developed by Israel and the U.S., Arrow-2 fits in an altitude band between THAAD and PATRIOT.

MIM-104 Patriot began as a surface-to-air missile, but the PAC-3 variant is optimized for BMD. Besides the U.S., Egypt, Germany, Greece, Israel, Japan, Kuwait, the Netherlands, Saudi Arabia, South Korea and Taiwan have it, and at least a temporary installation is in Poland.

A French-Italian-British development of the Aster series, Aster 30 Block 1 has 600 km range, and a longer-range Block 2 is under study.

There is a two-layer missile system protecting the Moscow area against small attacks, using 53T6 GORGON and 51T6 (missile)

Autocannon are operational in counter-rocket, artillery and mortar (C-RAM) systems to protect against a short-range threat that, to Israel, is also national. There are prototype laser systems in point defense, and Israel may be deploying a missile-based C-RAM system, Iron Dome. Iron Dome is optimized for unguided rocket threats over a large area, rather than point defense of military bases.

The U.S. has a ground-based interceptor (GBI) missile, with a limited number emplaced in Fort Greeley, Alaska, which engages long-range missiles during the midcourse phase.