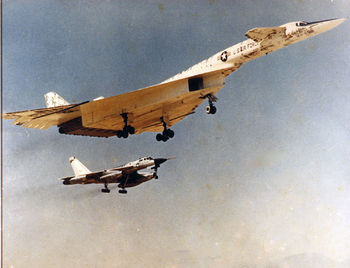 (PD) Photo: United States Air Force
North American XB-70A Valkyrie in flight landing configuration, with Convair B-58A flying chase. Note the blotched appearance is due to the white paint being flaked and burned off during the high speed flight portion of the test.

Built for the U.S. Air Force by North American, the B-70 Valkyrie (or XB-70 when deemed purely experimental) was intended as the ultimate high-altitude penetrating heavy bomber, with Mach 3 speed. The Mach 2 B-58 Hustler was considered a transition from the subsonic B-47s and B-52s, but improved Soviet air defenses, however, led to limiting the B-58 and cancelling the B-70. Space to expand electronic warfare equipment was judged far more important than raw speed; very few aircraft, such as the SR-71, can outrun a missile. Initial plans were to arm it with B41 and B53 thermonuclear gravity bombs. Both have very high yields, so accuracy in bombing from high altitude may not have been an issue.

The U.S. Strategic Air Command changed its approach to low-level penetration with improved B-52H bombers, as well as increased emphasis on intercontinental ballistic missiles. Ironically, the Soviets, who had started developing the MiG-25 fighter as a counter to the B-70, continued MiG-25 development and deployment even after B-70 cancellation. Attempts were made to find a military role, but the airframe was not suitable to low-altitude penetration. It was considered as a reconnaissance aircraft, but it had an immensely greater radar cross section than the purpose-built, faster SR-71. At full speed, it rode its own shock wave. A large canard foreplane near the front of the fuselage with a span of 28 feet, 10 inches was used for stability. In addition to its sharply swept delta wings, the XB-70s had two large vertical tails.[1] In various flight regimes, the nose and tail were intended to droop; it was occasionally called "Cecil the Seasick Sea Serpent", referencing a cartoon character it vaguely resembled.

Two were built, and eventually transferred to the National Aeronautics and Space Administration for research in high altitude, high speed flight. Results were especially relevant to planning supersonic transports. It first flew in 1964, and reached Mach 3 on 14 October 1965. The No. 2 airplane first flew on July 17, 1965, but on June 8, 1966, it crashed following a mid-air collision. The No. 1 airplane continued in its research program until flown to the museum on Feb. 4, 1969.