Within the Global Information Grid (GIG), the Army Battle Command System (ABCS) is the United States Army approach to automating its tactical command and control systems for field operations. It is intended to give commanders from brigade combat teams and supporting brigades, to higher headquarters (e.g., division and corps, which are now ad hoc structures under which brigades are organized). 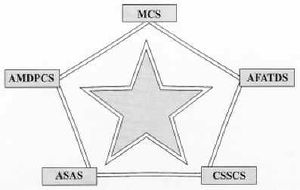 Its major subsystems are:

Force XXI Battle Command Brigade and Below provides application from the brigade-level up to the ABCS level. Army communications for tactical information feeding into ABCS comes through the evolving Warfighter Information Network–Tactical, with multiservice information from the Joint Tactical Information Distribution System.