Anti-aircraft artillery (AAA) is a general term for guns that can elevate to high angles and shoot accurately at aircraft, using visual, electro-optical, or radar guidance. Modern examples are almost always capable of full-automatic fire. In most advanced nations, the function is largely being replaced with surface-to-air missiles (SAM), although there is interest in hybrid AAA-SAM systems. Such systems, having radar and possibly electro-optical guidance, have more capability than some man-portable air defense system (MANPADS). 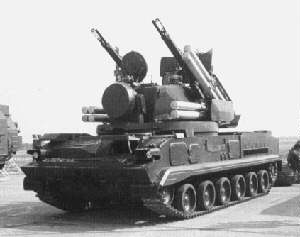 AAA played an important role in the Second World War, although it was not terribly effective in 1939 or 1940, until made part of an integrated air defense system. The original guns used visual sighting during daylight, and searchlights, coupled to directional microphones that tracked aircraft sound, at night.

In the Battle of Britain, limited use was made of radar-controlled AAA. As aircraft flew higher and faster, sound tracking had too much delay. Still, several technical developments made it much more effective: lead-computing sights that used early special-purpose computers to aim the gun at the position it would be when the shell arrived, and the proximity fuze.

Different countries put AAA in different defense structures. Medium and heavy AAA was under the German Luftwaffe, and under a separate service in the Soviet Union. In most other countries, AAA was under the ground forces, although increasingly in specialist air defense units.

The heavier World War II antiaircraft gun, such as the German 88mm more widely known for its antitank use, were loaded and fired manually, with individual shells. Medium AAA, such as the Bofors 40mm, were fed with clips containing a few shells.

In South Vietnam, the Viet Cong made very effective use of a Soviet-designed 12.7 and 14.5mm machine guns. Their effectiveness came from a man-portable pedestal mount, similar to the way the .50 caliber (12.7mm) machine gun is mounted on U.S. vehicles, but not on the portable tripod used by U.S. foot-mobile infantry. Weapons this light are effective only against modern transport helicopters; attack helicopters are armored against projectiles of this size.

Current examples for land warfare are towed by vehicles, or self-propelled. The Russian ZSU-23-4 is still widely used, and is a serious threat to helicopters and slower fixed-wing aircraft. 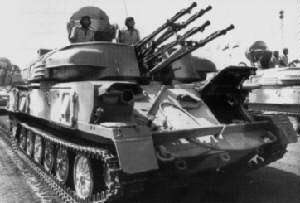 A new niche is forming for counter-rocket, artillery and mortar (C-RAM), using autocannon, intended for point defense of airfields and similar targets, which can engage light artillery rockets and other weapons fired by irregular forces.

Earlier land-based systems, such as the Soviet 57mm S-60, tended to use larger, slower shells, with a slower rate of fire that was marginal against jet aircraft.

When operating in groups of warships, and especially when the group includes friendly carrier- or land-based aircraft, coordination becomes quite complex, and is encompassed by the general term anti-air warfare.

Major naval combatants have used advanced AAA systems such as the Phalanx close-in weapons system (CIWS) for final defense against incoming anti-shipping missiles. These are rotating-barrel autocannon with extremely high rates of fire, although ammunition enough for only a few bursts. Their radar is quite advanced, simultaneously tracking the stream of shells and the incoming missiles, and finding the solution of where the two paths meet. Still, their range is sufficiently limited that they could engage a supersonic missile only at very close range. Even if they hit the missile, the intercept takes place sufficiently close to the ship that it may be damaged by the warhead explosion.

Their performance and range is questionable against newer supersonic sea-skimming missiles, and are being replaced by short-range missiles such as the RIM-116 Rolling Airframe Missile (RAM). There has been some discussion of shipboard hybrid systems analogous to the Russian 2S6 land system, but the trend appears to be to small missiles.

Still, there is a role for AAA against helicopters. Ships are retaining automatic weapons, typically 20-35mm, because they are useful against small boats that might make suicide attacks.