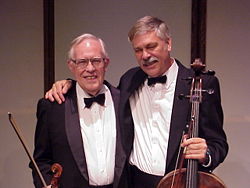 Toth played his violin on the World War II battlefields of Aachen, Germany ; performed with the NBC Symphony Orchestra under Arturo Toscanini in 1943[1]at age 18; and formed several chamber music ensembles, including the Oberlin String Quartet, the New Hungarian Quartet, and the Stanford String Quartet. For 15 years he was the violinist in the famed Alma Trio. [2]Toth conducted orchestras in Cleveland, Denver and Houston, was founding concertmaster of the Los Angeles Chamber Orchestra under Neville Mariner, taught at five important colleges and universities, and recorded for Vox, Decca Records and Eclectra Records.

Born in Manhattan in 1925, Toth began playing violin as a child and launched his career in 1942 at age 17 as solo violinist with the original Ballet Russes while he was still a graduate student at the Juilliard School. In 1943 at age 18, he joined the NBC Symphony Orchestra under Arturo Toscanini.[3] At Juilliard he studied with Hans Letz[4](formerly of the Kneisel quartet and a student of Joseph Joachim) and Ivan Galamian.

Andor Toth was married to Louise Rose,[5] a noted soprano, who died in 2005. The couple had three sons: Andor Jr., a cellist; Thomas, a software engineer; and Christopher, a programmer and network administrator who created a web site in his honor.[6] He formed the Toth Duo (violin and cello) with Andor Toth Jr., his eldest son - a CD is available. [7] Andor Jr. died in 2002 following a year-long battle with cancer. [8] 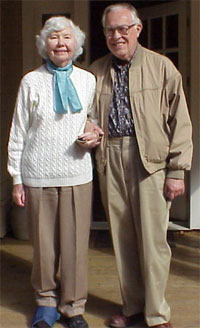 Andor Toth was Associate Concertmaster of the Cleveland Orchestra under George Szell and concertmaster Joseph Gingold. He was Associate Conductor of the Houston Symphony under Sir Thomas Beecham and Leopold Stokowski before joining the Oberlin faculty in 1955. In 1955, Toth formed the Oberlin String Quartet with violinist Matthew Raimondi, violist William Berman, and cellist John Frazer. In 1957, violinist John Dalley (second violinist in the Guarneri Quartet ), and cellist Peter Howard[9] (for many years principal cellist in the Saint Paul Chamber Orchestra ) joined the Quartet. In Summer 1958 the Oberlin String Quartet won fourth prize in the Concours International de Quatuor, sponsored by H.M. Queen Elizabeth Music Competition in Liege, Belgium "Quartet Debuts . . ."

In 1963 Toth joined the Alma Trio with pianist Adolph Baller and cellist Gabor Rejto, following the death of violinist Maurice Wilk. After the retirement of Adolph Baller, William Corbett Jones became the pianist. Toth remained with the Alma Trio until 1976 when it disbanded.

Toth founded the New Hungarian Quartet in 1972 with Richard Young, violin; Denes Koromzay, viola (1913-2001), formerly violist in the Hungarian Quartet; and Andor Toth Jr., cello (1948-2002), formerly principal cellist of the San Francisco Symphony under conductor Josef Krips. All members were faculty at the Oberlin Conservatory. From 1975-79 the Quartet was the first faculty quartet-in-residence at the Taos School of Music in Taos, New Mexico. [10]

In 1984, Toth founded the Stanford String Quartet with cellist Stephen Harrison[11], violinist Zoya Leybin[12], and violist Bernard Zaslov[13]. The quartet performed internationally until his retirement from Stanford in 1989.

While at Oberlin in 1958, he founded and conducted the Oberlin Chamber Orchestra. At Colorado, he founded the Baroque Chamber Ensemble that performed important Baroque works, including 'The Four Seasons' (Vivaldi) with Toth as soloist.

In June, 1967, he taught and played at the New College of Florida in Sarasota, Florida , for the first year of the Experimental Instrumental Performance Clinic, an event that became the Sarasota Music Festival.[15]

In the summer of 1968, Andor Toth performed and taught at the Rocky Ridge Music Center[16] in Estes Park, Colorado .

After moving to the San Francisco Bay area in 1978, Toth also taught briefly at the San Francisco Conservatory of Music and directed the Morrison Artist Series [17]. Andor Toth retired at Stanford University in 1989.

Following his retirement, he taught for one year at Arizona State University and then moved to Friday Harbor, Washington , on San Juan Island . In Friday Harbor he founded Chamber Music San Juans[18], a successful chamber music series that still is thriving. He also presented annual children's concerts for area schools.

Andor Toth taught a large number of students during his 35-year career in higher education. Most of them occupy important positions in orchestras and higher education as performers, teachers, conductors, and in allied professions. Some of his more prominent former students are listed here.

On September 28, 1982, New York Times critic John Rockwell had this to say about Toth's last New York concert: "Mr. Toth's principal virtue is his ability to invest even the most brilliant of passages with thoughtfulness; every phrase sounded shaped and considered, with a rich, ample tone . . . And Mr. Toth is hardly one of those violinistic poets who wins one over despite an erratic technique; his intonation and articulation were secure in a way that was continually impressive yet never called undue attention to itself." [24]