Ships of the ARG are armed for self-protection only. In the U.S. system, combining the ARG with a set of warships creates an Expeditionary Strike Group. The ARG also may operate with a Carrier Strike Group.

The usual combination has approximately 5,000 personnel. The ground component is commanded by a colonel, and the ships by a senior captain or commodore; the commodore may command the entire ARG.

In both U.K. and U.S. operations, additional, more general-purpose supply ships may follow the ARG. U.S. reinforcement will consist of a squadron of more of prepositioning ships, which may carry Air Force and Army supplies. Additional Marines fly in to a friendly airport and join up with the equipment on the MPS, possibly needing secure convoys to it. The MPS squadron may dock in a prepared port, or it may have to self-unload over a beach.

British capabilities are more ad hoc; in the Falklands War, a variety of "Ships Taken Up From Trade" (STUFT) transferred supplies, at sea, to the specialized amphibious ships.

With all the ship types, there are constant tradeoffs between at least four different storage constraints:

These issues are not unique to the U.S. Navy; the Royal Navy also routinely sends out significant Marine task forces. Many lessons were learned in the Falklands War. Much also has been learned in continency operations from the sea, such as noncombat evacuation operations, and combat search and rescue (the Marine flavor called Tactical Recovery of Aircraft and Personnel).

U.S. types are described here, but there are close British equivalents:

The largest vessel in the ARG is an amphibious assault ship, of one of two types. They look like small aircraft carriers, but can only carry STOVL and VTOL aircraft. 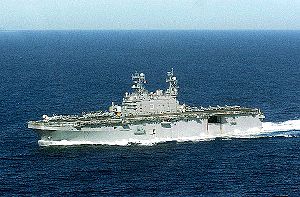 In the Royal Navy, HMS Ocean is designated a "helicopter carrier" and would be the flagship of a large ARG. The Queen Elizabeth class ships under construction are true aircraft carriers, currently STOVL but designed to be convertible to CTOL ships; they would be more likely to be in a carrier group than as part of an ARG.

U.S. Navy versions have various designations; different generations have been known as amphibious transport dock (LHD)s, Landing assault ship (LHA)s, and Landing Platform Helicopter (LPH)s; the first two have well decks while an LPH does not.

Dock Landing Ships (LSD) support amphibious operations including landings via Landing Craft Air Cushion (LCAC), conventional landing craft and helicopters, onto hostile shores. They are the most self-contained, so they can be sent on independent operation when a smaller force is needed. The three classes of U.S. LSDs are the

In the Royal Navy, the new ship type in this role is the Large Amphibious Landing Ships of the Bay class

The most distinctive aspect of this type of ship is that they contain a central "well deck" that can open to the sea, so conventional landing craft, as well as landing craft air cushion, can disembark and head for the landing area, fully loaded.

This is a U.S. Marine Expedititionary Unit or Royal Marine Commando, which has organic air and logistics support for a ground combat element of battalion strength. It may be supplemented with other ground specialists, such as special operators from the United States Navy SEALs or UK Special Boat Service, tanks, engineers, intelligence specialists, etc.

Both the US and UK now use variants of the Harrier short takeoff and vertical landing aircraft, which provides close air support, limited anti-surface warfare, and, as demonstrated in the Falklands War, a significant air combat capability. Both countries expect to replace their Harrier types with the F-35B Lightning II.

Next comes the transport helicopters. There is a heavy vertical lift capability. The US uses CH-53 Sea Stallion helicopters while the UK uses CH-47 Chinooks. There are medium lift helicopters, such as the CH-46 Sea Knight or Wessex; the U.S. Marine Corps expects to replace these with MV-22 Osprey tilt-rotor aircraft.

There are scout and attack helicopters. The U.S. Marines use the AH-1 Cobra.