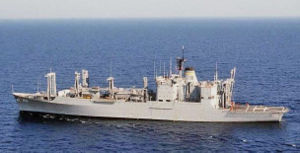 An ammunition ship is a naval auxiliary vessel specially configured to carry ammunition, usually for Navy ships and aircraft. Their cargo handling systems, designed with extreme safety in mind, include ammunition hoists with airlocks between decks, and mechanisms for flooding entire compartments with sea water in case of emergencies. They most often deliver their cargo to other ships using underway replenishment, using both connected replenishment and vertical replenishment. To a lesser extent, they transport ammunition from one shore-based weapons station to another.

During World War II, several ammunition ships were involved in spectacular explosions. Notable among them was USS Mount Hood (AE-11), which exploded in the Admiralty Islands on November 10, 1944.

Less spectacular, but more insidious, resulted from the bombing of the SS John Harvey in the harbor of Bari, Italy on December 2, 1944. Under great secrecy, she was carrying a supply of mustard gas bombs, reserved for retaliation against a German chemical attack. The secrecy prevented medical personnel to know, and treat appropriately, the casualties were also victims of Allied chemical weapons.

Dedicated ammunition ships are not used in fleet operations. Cargo force logistics ships and fast replenishment ships have safe storage for ammunition, but carry other cargo as well. In the prepositioning ship squadrons, however, are ships dedicated to carrying U.S. Air Force ammunition.