A constellation of satellites with associated ground stations, the Advanced Extremely High Frequency (AEHF) system is backwards-compatible with the previous generation of MILSTAR tactical communications satellites. AEHF offers significantly higher bandwidth. The program, managed by the United States Air Force, is common to other U.S. military services, and also is joint with Canada, the Netherlands, and the United Kingdom.[1]

Prior to the AEHF, U.S. and allied military satellite communications systems fell into one of three categories:[2]

AEHF, however, converges the role of its wideband Defense Satellite Communications System and protected MILSTAR predecessors, while increasing bandwidth over both. There will still need to be specialized satellite communications for extremely high data rate space sensors, such as geospatial and signals intelligence satellites, but their downlinked data will typically go to a specialized receiver and be processed into smaller amounts; the processed data will flow through AEHF.

It extends the "cross-links" among AEHF of earlier MILSTAR satellites, which makes it much less vulnerable to attacks on ground stations. As a geosynchronous satellite over the Equator, it still needs to be supplemented, with additional systems optimized for polar coverage in high latitudes. 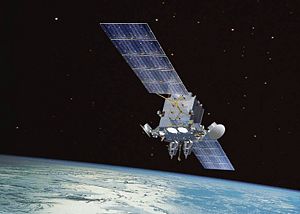 Artist's conception of AEHF in space; note range of antennas

Built by Lockheed Martin Space Systems Company, and the onboard electronics are partially adapted from the Lockheed Martin A2100 commercial communications satellite bus, the high-risk developments include the orbital position thrusters and the antennas.

AEHF satellites are sent into space using the Evolved Expendable Launch Vehicle (EELV). The payload weight at launch is approximately 14,500 pounds; by the time it expends propellants to achieve proper orbit, its weight is approximately 9,000 pounds. The satellite will operate in geosynchronous earth orbit (GEO) orbit; it takes over 100 days for the orbital adjustments to reach its stable GEO position after launch.

Uplinks and crosslinks are in the extremely high frequency (EHF) while the downlinks use the the super high frequency (SHF). The variety of frequencies used, as well as the desire to have tightly focused downlinks for security, require a range of antennas, seen in the picture:

The low gain earth coverage antennas send information anywhere in the third of the earth covered by each satellite's footprint. Phased array antennas provide super high-gain earth coverages, enabling worldwide unscheduled access for all users, including small portable terminals and submarines. The six medium resolution coverage antennas (MRCA), are highly directional "spot" coverage; they can be time-shared to cover up to 24 targets. The two high resolution coverage area antennas enable operations in the presence of in-beam jamming; the nulling antennas are part of the electronic defense that helps discriminate true signals from electronic attack. [3]

Another change from existing satellites is using solid-state transmitters rather than the traveling wave tubes used in most high-power military SHF/EHF applications. TWTs have a fixed power output; the newer devices allow varying the transmitted power, both for lowering the probability of intercept and for overall power efficiency.

While there are a number of ground terminals, the airborne terminal has been part of the Family of Advanced Beyond Line-of-Sight-Terminal (FAB-T) project. Other ground stations include the Single-Channel Antijam Man-Portable Terminal (SCAMP), Secure Mobile Antijam Reliable Tactical Terminal (SMART-T), and Submarine High Data Rate (Sub HDR) system.

With Boeing as the prime contractor and L-3 Communications and Rockwell as major subcontractors, the first FAB-T (Increment 1)was delivered, for use on the B-2 Spirit aircraft, in February 2009. It is planned for other aircraft including the B-52, RC-135, E-4, and E-6 aircraft. Other installations will go into fixed and transportable command posts. It successfully interoperated with legacy communications using an command post terminal and the Army Single Channel Anti-jam ManPortable Terminal,[4]