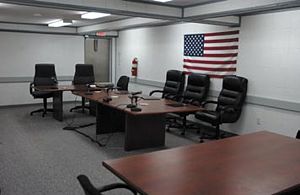 An Administrative Review Board (ARB) has been on an annual review of persons detained in in the Guantanamo detention camps, in its Naval Station Guantanamo Bay.[1] The legal authority for the ARB and its predecessor Combatant Status Review Tribunal (CSRT) is in a somewhat blurry legal area, potentially a "competent tribunal" recognized in international but not U.S. law (i.e., the Third Geneva Convention), or as a form of administrative law, or as something specific to the unique authority of the President of the United States as commander-in-chief under Article II of the U.S. Constitution.

From July, 2004 through March, 2005, military authorities conducted a one-time CSRT for each suspect. The Combatant Status Reviews determined that 38 suspects were not illegal combatants after all. They determined that the rest of the suspects had been correctly classified as "enemy combatants" during the original assignment process, usually based on classified information.

The purpose of the Board is to review whether the suspects still represent a threat. American authorities classify the suspects as "enemy combatants", a term that has no customary meaning in international law; the Geneva convention language determines whether an individual is a lawful combatant.

As of September 2005 there were approximately 500 suspects in Camp Delta. The first set of Administrative Reviews took place between December 14, 2004 and December 23, 2005. The Boards met to consider the cases of al 463 eligible captives.[2] They recommended the release of 14 captives, and the repatriation of 121 captives to the custody of the authorities in their home countries.

According to an article from the International Herald Tribune from April 22, 2006 the ARB had determined three captives could be released and 107 captives could be repatriated to the custody of their home countries, yet they still remained in Guantanamo.[3] US officials said their continued detention was due to concerns the captives might be tortured or killed if they were returned or repatriated, which is consistent with the refoulement doctrine of the Convention against Torture

An article published in the November 19th, 2007, issue of the Boston Globe how captives who were cleared for release years ago yet remain in Guantanamo,has eroded the remaining confidence the captives placed in the Boards.[4] Over half of the captives participated in their Boards in 2005. Less then twenty percent participated in 2006.