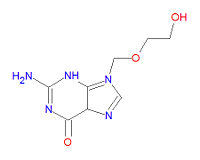 Acyclovir, or aciclovir, is an antimetabolite drug used to treat viral infections. It is an analog of the DNA base guanosine that is particularly used to treat and manage herpes zoster (shingles), genital herpes, and chickenpox infections. It is the prototype antiviral agent that is activated by viral thymidine kinase. The selective activity of aciclovir is due to its affinity for the thymidine kinase enzyme encoded by HSV and HZV. The drug is converted to the triphosphate version, which competes with the natural deoxyguanosine triphosphate for incorporation into viral DNA. Once incorporated, aciclovir triphosphate inhibits DNA synthesis by acting as a chain terminator. Aciclovir may cause nephrotoxicity and neurotoxicity but symptoms usually resolve after cessation of treatment.

Its IUPAC chemical name is 2-amino-9-(2-hydroxyethoxymethyl)-3H-purin-6-one and its chemical formula is C8H11N5O3.

The most up-to-date information about Acyclovir and other drugs can be found at the following sites.