This genus is represented by a single species, the cheetah Acinonyx jubatus. The cheetah and king cheetah are both members of the same species. 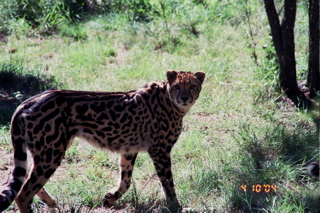 The cheetah Felidae is 1.8-2.2 m in length, with the tail being between 60 and 80 cm, and stands approximately 80 cm at the shoulder. Adults weight 40-60 kg (with males being larger than females. [2] [3] The cheetah is a tall slender cat with long legs and tail. They have small ears and a round head with short muzzle. They have a yellow-gold coat which is covered with distinctive black spots (the exception is the aberrant colour of the king cheetah which has a patch work of stripes and spots. The ears have white tips and they have a very distinctive ‘tear line’ running from the inner corner of the eyes to the corner of the mouth. Cheetahs are the only cats that cannot retract their claws.

The fastest land mammal, it can reach speeds of 100km/h and uses this speed to capture its prey. The cheetah is diurnal and is typically active in the hours of the early morning and again just prior to sunset. They are solitary in nature; the exceptions to this are mothers with young and siblings that have stayed together upon independence from the mother. Cheetahs have considerable home ranges that overlap to some extent . There is no set breading season and females can have litters of 3-6 cubs at any time of the year. [3].

Cheetahs prey upon any small to medium size bovids and the young of large bovids.

The cheetah occurs today in Africa and in limited numbers in Iran. They are considered rare in West Africa and still occur in parts of North Africa. East Africa, namely Kenya and Tanzania, and southern Africa, namely Namibia and Botswana, maintain the largest populations.