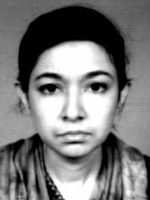 Aafia Siddique is a Pakistani neuroscientist, who was captured and charged with attacking U.S. personnel during a July 18, 2008, search in Afghanistan. She was been convicted of all seven counts against her, in the United States District Court for the Southern District of New York in February 2010, and faces life in prison. [1]

The Federal Bureau of Investigation complaint states she had materials in her possession involving "creation of explosives, chemical weapons, and other weapons involving biological material and radiological agents [and]... descriptions of various landmarks in the United States, including in New York City." [2] Siddique and her three children disappeared after taking a taxi to the Karachi airport on March 29 2003, and reappeared in US custody in August 2008.

Siddique and her first husband, Mohammed Amjad Khan, studied at American universities in Boston in the 1990s. Aafia and her Khan traveled to the Boston area in the early 1990s, were they studied, and their first two children were born. The couple founded a non-profit named the Institute of Islamic Research and Teaching.

Following al-Qaeda's attacks of September 11th, 2001 the couple fell under suspicion, due to their founding of an Islamic charity.[3] The couple returned to Pakistan, with their relationship dissolved in 2002. Aafia made a trip back to the USA, to look for work. She returned to Pakistan in the fall of 2002, where her third child was born.

The U.S. Director of National Intelligence (DNI) report stated she had split from her husband because she was more liberal than he was promptly re-married Ammar al-Baluchi, an al-Qaeda leader.[3] It assert that she was denounced as a fellow al-Qaeda member by al-Qaeda leader Khalid Sheikh Mohammed, after his capture in early March 2003. It was alleged she had traded conflict diamonds on behalf of al-Qaeda.[4] Part of the allegations were that the post-office box she opened during her job search was part of a plot to aid Majid Khan, another Pakistani, who had attended high school and University in the USA, who fell under suspicion because his parents ran a gas station in the USA.

Aafia and her three children disappeared after taking a cab to the airport on March 29th 2003.[5]

She left her home to go to the airport from her Karachi residence," he told AKI. "It appears that she was picked up somewhere going to the airport. I tried to contact her mother but she refused to talk and later she also disappeared. Siddiqui disappeared with her three children. Neither her or her children's whereabouts have been known for the last five years[6]

American and Pakistani authorities denied she had been captured. She continued to be listed as "at large" by American counter-terrorism officials, but officials privately acknowledged that she was a captive.

On July 7, 2008 the Daily Times of Pakistan quoted British journalist Yvonne Ridley that a Pakistani woman had been held in solitary confinement, for years, in the Bagram Theater internment facility.[5][6]

Moazzam Begg and several other former captives have reported that a female prisoner, prisoner 650, was held in Bagram.[6] Iqbal Jaafree, a Pakistani lawyer, petitioned a Pakistani court for a hearing to determine Siddiqui's location.[7][8]

Several former captives held in the Bagram Theater Internment facility claimed the facility held a female captive, who was held separately, and had been driven mad and could be heard howling incoherently.[9]

On August 4, 2008 the Department of Justice reported that Aafia had been captured by Afghan police authorities on July 26, 2008, in Ghazni.[10] She was apprehended with a teenage boy, reported to be her eldest son, because their presence in Ghazni was suspicious. She was reported to have in her possession a map of Ghazni, showing the locations of government buildings, and to have in her possession bottles of fluid.

Further, the Department of Justice reported that on July 27, 2008, when Americans came to interrogate her, she seized an automatic rifle one American guard had left lying on the floor, and opened fire on the Americans -- missing all the Americans, but sustaining at least one gunshot wound herself.[11]

Afghan officials told Reuters reporters a different story.[12] Reuters reported that Afghan officials told them that the Americans had not come to interrogate her, but instead had decided to disarm all the Afghan police officials, and seize her. They reported that she had come forward to the Americans to complain about her treatment by the Afghan police, only to be shot by a soldier, who thought she might have been carrying a bomb.

She was transferred to New York, where the Department of Justice charged her with trying to kill American officials on July 27th.Her lawyers reported that they feared her life was at risk because her wounds were not being treated. Pakistani newspapers reported that during the five years since her disappearance, when she was believed to have been in secret US custody, her natural teeth had been replaced by false teeth, her nose had been broken and inexpertly set, that one of her kidneys had been removed. Her lawyers reported that her wounds were still bleeding and her clothes were soaked with blood.

On August 12 her lawyers petitioned to have the Prosecution be forced to give Aafia medical attention. The Prosecution claimed that she had not received the attention of a doctor during the ten days she had been in the USA because her situation was "unusual", and she represented a "high-security risk". The judge gave the Prosecution 24 hours to see that she saw a doctor.

She continued to protest and was removed. Her attorney, Elaine Sharp, said her client was not anti-Semitic but pro-Palestinian, and told reporters “Dr. Siddiqui wants you all to know that she doesn’t want there to be violent protests or violent reprisals in Pakistan over this verdict.”[1]