In response to automated warnings of radar, infrared, laser and other threats against aircraft, the AN/ALE-47 Countermeasures Dispenser System (CMDS) both assists the crew in staying aware of the threats, and managing the deployment of electronic warfare devices that operate externally to the vehicle.[1] "Electronic", in this context, covers enemy sensors across the electromagnetic spectrum. Electronic defense includes, as well as receivers and computers that detect and analyze threats, both countermeasures that are part of the aircraft, but also expendables that are released from it.[2]

These expendables include radar-reflecting chaff, infrared countermeasures to confuse heat-seeking missile guidance, and disposable radar transmitters. In addition to active and passive countermeasures, expendables now include sensors for both electronic support, electronic warfare, and other intelligence functions such as chemical weapon detection using materials MASINT. In addition to the truly expendable items usually released as cartridges, a modern dispenser system will control towed decoys that lure radar- and infrared-guided missiles that avoid the other countermeasures. 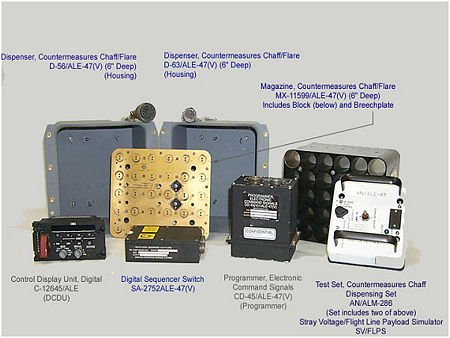 The device is used by all the U.S. military services, as well as 20 other countries. It ALE-47 adds software to the earlier AN/ALE-40, but adds considerable intelligence. It also can use the expendable cartridges built for the ALE-40 and ALE-39. This earlier generation of cartridges did not have their own computers, but were simple flares or radar-reflecting chaff bundles.

New cartridges, such as the RT-1489/ALE (GEN-X) expendable decoy, intelligently retransmit a radar signal that reproduces the reflection for which a semi-active radar homing missile is aiming. Cartridges for various electronic intelligence functions are being built to the same form factor, as well as the CADDIE chemical sensors described below.

It replaces the older towed ALE-50 with the AN/ALE-55, which remains connected to the aircraft electronic warfare computers.

Against a simple heat-seeking missile, the appropriate response might be four flares, 0.1 seconds apart, released when the missile is within 1 mile. This pattern might be preprogrammed release "A" to the flare launcher

If, however, the threat were a two-stage missile with midcourse radar and final heat-seeking guidance, the more appropriate response might be:

For a missile assessed as radar only, the appropriate response might be program "B", followed by two executions of program "C".

Manual mode allows the crew to trigger, for example, program "D" for a threat that they see and the automatic sensors do not. Bypass mode would let them release individual cartridges in the event of an unexpected threat type, or a failure of the intelligent threat analyzer.

Rules about selecting automatic or semiautomatic modes, as well as the TLS subprograms and the actual launch commands, are loaded into the ALE-47 with a AN/USQ-131B Memory Loader/Verifier Set (MLVS) over a MIL-STD-1553 type data bus. The ALE-47 can also integrate with non-expendable defensive subsystems, such as a high-power deceptive radar signal transmitter, or a infrared countermeasures device (e.g., AN/AAQ-24) that will burn out the missile seeker.

Among the cartridges it can eject is the CCU-136A/A impulse cartridge, certified safe for the Hazard from Electromagnetic Radiation to Ordnance (HERO) aboard ships. All previous expendable jammers could go off in the dispenser if hit by the right radar signal from frieldly sources. This cartridge holds either self-protection jammers or the AN/ALE-55 Fiber Optic Towed Decoy (FOTD).

An advancement over the AN/ALE-50, the AN/ALE-55 both has aerodynamic controls, and a reinforced fiber optic tow cable that can withstand the afterburner of a F-18 Super Hornet or B-1 Lancer. This towed device is part of an integrated electronic warfare system. electronic support comes from antennas on the aircraft, but the jamming of the threat sensor can come either from aircraft or towed decoy.

If the EW system decides the jamming would best come from the decoy, it uses the onboard computers to generate an optimum jamming pulse, converts it to light, sends it down the fiber optic cable, where the ALE-55 converts light to the appropriate frequency and radiates it. In contrast, the earlier ALE-50 had to make all its decisions with its limited onboard logic.[3]

Experimental use in wide-area chemical detection

The Chemical Agent Dual-Detection Identification Experiment (CADDIE) [4] was developed by the US Navy as a feasibility demonstration of a Unmanned Aerial Vehicle using onboard sensors to locate a suspicious cloud, and then drop disposable ChemSonde sensors into it. 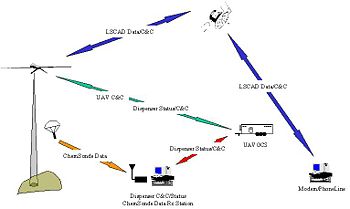 This system demonstrated several characteristics of modern measurement and signature intelligence: a broad-look capability, as with "pushbroom" radar, and then a close-look with the materials MASINT disposable sensors. The sensors are released from an off-the-shelf ALE-47.

CADDIE may have been deployed on the Altus ST unmanned aerial vehicle. [5]