AGM-86 air launched cruise missiles (ALCM) are a long-range weapon of the United States Air Force, with different versions carrying conventional explosive as well as nuclear warheads.[1] The first deployed version of this cruise missile, the AGM-86B, carried a W80 nuclear warhead, and are covered by arms control agreements. While the U.S. Single Integrated Operational Plan for nuclear war traditionally was based on a "triad" of land-based intercontinental ballistic missiles, manned bomber aircraft, and submarine-launched ballistic missiles, the general assumption was that the bombers would drop gravity bombs. Cruise missiles launched from ships, submarines, or aircraft present an adversary with yet another threat for which defense is needed. 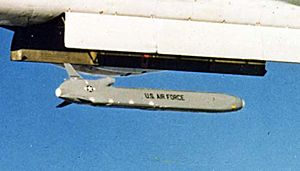 Conversion of the nuclear-tipped versions to conventionally armed cruise missiles (CALCM) was done in secret. The secrecy was not so much of the technology itself, but that it had been deployed. The AGM-86C carries a blast-fragmentation warhead for "soft" targets, while the -D model has a penetrating warhead for use against hardened targets.

Block II of the D model adds a precision strike capability, performing a terminal pop-up and near-vertical dive into the target, for maximum penetration. In a 1996 test, a prototype hit within 2.5 meters of the center of its target.[2]

While the AGM-86 is not itself stealthy as was the cancelled AGM-129, they are surprise weapons, not for routine use but capable of employment literally anywhere in the world. Unless ships or submarines already are in the area of operations, a cruise-missile carrying bomber can get into range faster than other conventional systems. The other alternative is the B-2 Spirit stealth bomber, but, even with its resistance to detection, it must come closer to the target and puts crews at risk.

There may be an AGM-86E model with longer range;[3] there may be more than one competing long-range air-launched cruise missile program.

The CALCM was classified — their crews called them "Secret Squirrels" — until its first use in the Gulf War, during which seven B-52 aircraft flew 14.5 hour missions from Barksdale Air Force Base, Louisiana, to a spot in the sky, where they fired the long-range missions at targets in Iraq. [4] The CALCM has a warhead twice as heavy as the Navy's ship- and submarine-launched BGM-109 Tomahawk cruise missile.

Since then, they have been used in Iraq, the Balkans, Afghanistan and the Iraq War.