Developed for U.S. Navy Ticonderoga-class cruisers and Burke-class destroyers, and used by several foreign navies, the AEGIS battle management system is an integrated complex of sensors, weapons controllers, missiles, computers and human interfaces that lets a ship control an air battle with a radius of over 200 miles. One of the key aspects of the system is that it can orchestrate the efforts of several ships and radar aircraft, even, with a feature called the Cooperative Engagement Capability, fire and guide weapons from launchers on other ships. It guides fighter aircraft in the outer air battle several hundred miles from the center of the area being defended, and fires and directs surface-to-air missiles launched from AEGIS ships. The primary missiles it controls is the Standard SM missile series and the BGM-109 Tomahawk.

The first deployment was on Ticonderoga-class cruisers, although some features first appeared on Burke-class destroyers and later came to the cruisers, or vice versa. Some features were on one class and not the others. The revision levels started as a set of AEGIS baselines, not to be confused with the "flights" of Burke revisions or of Ticonderoga ship baselines of feature sets. Not considering baselines that were essentially prototypes on retired ships, the generations began with Baseline 2.

This was on the first vertical launch system ships, the cruisers; all active AEGIS ships have VLS only. It provided BGM-109 Tomahawk cruise missile strike warfare and anti-submarine warfare.

On cruisers, the main SPY-1 radar upgraded to 1B level, with AN/UYQ-21 consoles.

This brought the more powerful AN/UYK-43/44 computers with superset computer to the cruisers, using software developed for the "Flight 1" Burkes, DDG51-67. These computers, and the AN/SPY-1B, is the basic Burke sustem.

Baseline 6 Phase I is planned for the last ship in FY 1994, and Phase III is planned for the first ship in FY 1997. What happened to Phase II? It was the bringing-together of the Baseline 5 baseline computers, with enhancements to allow Tactical Ballistic Missile Defense and Cooperative Engagement Capability. Phase III requires the AN/SPY-2 upgrade to the main radar.

Up to this level, while the ships could refuel helicopters, they had no hangars for them. Baseline 6 Phase III ships had hangars for a pair of SH-60 helicopters.

Another group of enhancements were electronics, starting with an upgraded "nervous system" of shipwide fiber optics in a Data Multiplexing System (DMS), and a number of training computers. Combat electronics added new workstations, and weapons upgrades:

Eyes of the AEGIS 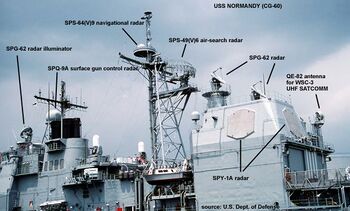 In the days of wooden ships and iron men, a sharp-eyed lookout, high on the mast and assisted by a telescope, might first see a sail on the horizon; his cry of alert would start the ships' officers looking with their own glasses, to see the enemy, landnarks, friendly ships, and begin constructing the battle plan. In the AEGIS system, the long-range lookout function is the role of the AN/SPS-49 long-range radar. This is a rotating radar antenna high on the mast behind the main forward tower of the Ticonderoga ships, where it has a higher horizon than the main radar. Burkes do not have this additional AAW capability.

The main eyes of the system are in the hexagons on the pyramid-shaped structure of passive phased array radars around the superstructure of an AEGIS ship; for the initial discussion, we will assume a single AEGIS ship controlling and shooting missiles, and then add other ships and aircraft to the system.

Those expert eyes, in the first version, are the AN/SPY-1 radar. The basic SPY-1, over the continuing life of AEGIS, has gone through several upgrades in power and sensitivity, closely coupled with more advanced computers and missiles.

These eyes need additional functions, the AN/SPY-2, a set of upgrades, for ballistic missile defense.

The Fingers of Death

While the SPY-1 radar is sufficient to put the SM-2 missile into the right direction for the target, in the last seconds of flight, one of the AN/SPG-62 directional illuminator radars will briefly shine on the target, reflecting signals back to the semi-active radar homing final seeker of the SM-2. Only a few seconds of illumination is needed for the missile to find and die with its target, so the number of SPG-62's is far less than the number of missiles that can be in flight. Ticonderoga-class cruisers have four SPG-62 radars, while Burke-class destroyers have three.

A more peaceful AN/SPS-64 radar provides navigational guidance, along with the ship's other navigational systems.

AEGIS as a multiplatform system