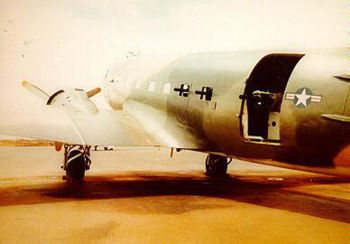 (PD) Photo: USAF
AC-47 gunship - one gatling gun points out the cargo door, and one each points out of the two windows forward of the door.

The AC-47 is a cargo plane that had M61 Vulcan (machine gun), with an extremely high rate of fire, positioned to fire perpendicular to the plane's flight.[1] The weapons were mounted in the C-47 Skytrain, a plane essentially identical to the commercial DC-3. The plane's pilot would fly the plane so that it circled an area where enemy ground forces were believed to be located; the actual flight path was called a pylon turn. Firing from such a turn would put a straight line of fire on the ground.

AC-47 aircraft, with their long endurance, also would patrol over an endangered area at night, principally dropping flares but firing on targets of opportunity. Troops called them "Puff, the Magic Dragon" after a contemporary folk song by Peter, Paul and Mary.

The planes first saw operational use in the Vietnam War,[1] where they were assigned to units including the 4th Air Commando Squadron[2]

Even there, the AC-130 eventually replaced it. Currently the United States Air Force fields much more advanced AC-130 models; the concept pioneered in the AC-47 proved sound. Today's Air Force Special Operations Command is the successor to the Air Commando units.