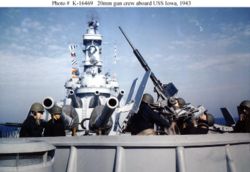 The 20mm antiaircraft (AA) gun was a manually tracked piece of anti-aircraft artillery widely used on ships of the U.S. Navy and other navies during World War II. It was a close-range, high-angle gun designed by the Swiss arms maker Oerlikon, and was sometimes called the Oerlikon gun.

The 20mm gun was a pedestal-mounted blow-back recoiling, air cooled automatic gun which fired an explosive shell, including the "tracer" which glowed as it traveled towards its target and indicated the direction of fire. The gun was usually manned by a three- or four-man crew. It was capable of firing 450 rounds per minute, with a maximum range of 5,500 yards

Widely used by the Allied nations, the 20mm Oerlikon was probably produced in higher numbers than any other antiaircraft weapon of WWII. U.S. companies alone manufactured 124,735 of them. The first of these was test-fired on 8 June 1941; almost 400 had been delivered by 7 December 1941. In the U.S. Navy, the 20mm replaced the ineffective .50 caliber machine gun on a one-for-one basis and was the primary anti-aircraft gun until late in 1943. At that time, the U.S. found that 20mm shells were too light to stop the Japanese Kamikaze planes, and that higher aircraft speeds both made manually controlled guns obsolete and also demonstrate that the Oerlikon's range was too short. As a result, these weapons were replaced by 40mm guns wherever possible. They were removed from most U.S. ships shortly after the war.

Nevertheless, the Japanese retained a comparable, or even inferior light weapon, the 25mm-60 caliber gun well after the U.S. and other powers found that the smallest practical antiaircraft gun was in the 40mm range.

20mm is still as a dual-purpose gun on light naval vessels, although 25mm and larger calibers are more common when the weapon has an air defense role. 20mm has had a role in such final defenses as the Phalanx close-in weapons system, but the target, ammunition, and rate of fire are quite different — and the Phalanx is obsolete for naval vessels although still has land-based applications where the engagement geometry is different.