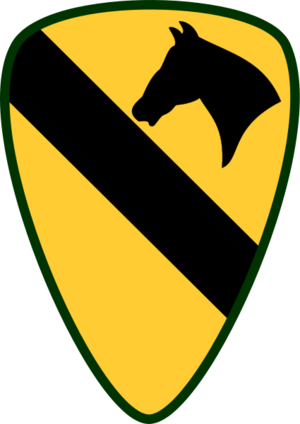 1st Cavalry insignia:The insignia selected for the First team patch was designed by Colonel and Mrs. Ben Dorsey. The colonel was then commander of the 7th Cavalry Regiment at Fort Bliss, Texas. Mrs. Dorsey related that the combination of the golden sunset at Fort Bliss and the traditional colors of the Cavalry; blue and yellow, were a great influence on the background color and the insignia. The choice of the horse's head for the insignia was made by the family after they observed a mounted trooper ride by their home on a beautiful blue-black thoroughbred. Later, to improve visibility, the color scheme was modified replacing the blue for black, the symbolic color of iron and armor.[1]

Currently a heavy (i.e., mechanized and armor) division of the United States Army, the 1st Cavalry Division, commonly "First Cav", has a name that is historical but proud; it has been a very long time since it had horses. During the Vietnam War, it was an air assault division using helicopters as virtual horses. The Division takes intense pride in its yellow and black shoulder patch, often considered the gaudiest in the Army.

Its lineage is in horse cavalry units from the American Civil War and the frontier wars; it was organized as a horse cavalry division, to patrol the western United States and Mexican border, in 1921.

By 1943, it became a foot infantry division and was sent to the Southwest Pacific Area headed by Douglas MacArthur. Its first combat operation was February 29, 1944 the men of the division sailed for the Admiralty Islands and stormed ashore in an amphibious landing at Los Negros Island in the Admiralty Islands. It had a major role in the Philippines campaign, first on Leyte and then on the main island of Luzon.

On January 31, 1945, MacArthur, "Go to Manila, free the prisoners at Santo Tomas, take Malacanan Palace and the legislative building." A fast column freed the endangered prisoners of war at the Santo Tomas Prison Camp, and it was then the Army unit "First in Manila". Subsequently, it was the lead unit in the occupation of Japan.

It made an amphibious landing to reinforce the beleaguered Pusan Perimeter on July 18, 1950. In mid-September, it was part of the breakout, capturing Pyongyang on October 9. After the Chinese intervention, it was part of the defense of Seoul, returning to Japan in 1952. It returned to Demilitarized Zone patrol in 1957, continuing until 1965, when it deployed to Vietnam.

It patrolled the Bong Son through 1968, redeploying to I Corps tactical zone in time to meet the Tet Offensive. It relieved Quang Tri by February 1, and then linked up with the Marines, ending the Battle of Khe Sanh.

The division was part of the May 1970 strikes into Cambodia, and was the first division to leave in 1972.

In the Gulf War, the 1st Cav was Theater Reserve reporting to GEN H Norman Schwarzkopf Jr., also conducting reconnaissance in force to deceive the Iraqis on where the main Operation DESERT SABRE ground assault would come.

In the Surge, the division was Multi-National Division-Baghdad, with its deputy commanding general for maneuver, John F. Campbell, as the primary U.S. operational commander.