The 1st Canadian Infantry Division was a formation of the Canadian Army created for service in the Second World War. Disbanded in 1945, the division was reactivated twice during the Cold War.

The 1st Canadian Infantry Division was mobilized on 1 September, 1939 for service in the Second World War. While Canada did not declare war on Germany until 10 September, several independent units were mobilized as early as 25 August for local protective duties, and a general mobilization of a field force (soon to be designated Canadian Active Service Force) followed when the invasion of Poland by Germany was announced.

The division mobilized in Canada; each brigade had included one of Canada's three Permanent Force infantry battalions. The brigades were also organized regionally, with the 1st from western Canada, the 2nd from Ontario, and the 3rd from Quebec and the Maritime Provinces.

The division crossed the Atlantic in two main convoys at the end of 1939, with additional troops reaching the United Kingdom at the beginning of February 1940. Only partially equipped, the division embarked on a programme of training. In the wake of the Dunkirk evacuation the Canadians adopted a coastal defence role. One brigade, the First, was sent to the continent in June 1940 but was withdrawn before making contact with the enemy.

In 1943, following commando training in Scotland, the Division embarked for the Mediterranean to take part in the Battle of Sicily in July. Following the battle, they landed in Calabria and fought up the Italian peninsula from Ortona to the Senio with the British 8th Army. The division came under the command of I Canadian Corps in early 1944 when that headquarters was activated in Italy.

The 1st Division took up winter positions in late December of 1944 and spent its second winter in Italy on the Senio. The division departed Italy as part of Operation Goldflake in February 1945, finishing the war in the Netherlands with First Canadian Army.

(In July 1944, the divisional reconnaissance battalion, the 4th Princess Louise Dragoon Guards, converted to infantry and transferred to 12th Infantry Brigade of the 5th Canadian Armoured Division, to be replaced by The Royal Canadian Dragoons. The Princess Louise returned to its original mechanized role in Northwest Europe in March of 1945, and The Royal Canadian Dragoons became the armoured car regiment of I Canadian Corps.) 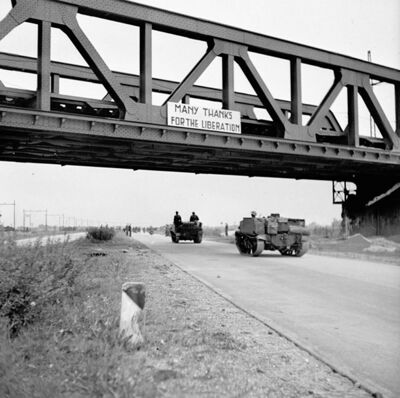 Universal Carriers of the 1st Canadian Infantry Division in the Netherlands in 1945. The sign erected by local inhabitants thanks the Canadians for their liberation from the Nazis. Public Archives of Canada Photo A137742.

A 1st Canadian Division Headquarters was reactivated twice following the Second World War, in 1954 (disbanding in 1958) and in 1988 (disbanding in the 1990s).