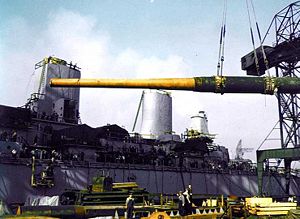 Mk7 gun barrel being lifted onto USS Iowa for installation

Developed by the U.S. Navy as the primary weapon for battleships of the Iowa-class, the 16"-50 caliber MK 7 naval gun represents a thoughtful set of design tradeoffs among gun weight, projectile penetrating power, range, and rate of fire. While the Iowas never engaged in combat with other battleships, but used these cannon for shore bombardment, many gunnery specialists consider it the best battleship main gun ever developed.

A common "what-if" is to consider an engagement between the Iowas and the contemporary Yamato-class battleships of the Imperial Japanese Navy. While such consideration cannot be based on the guns alone -- the Iowas were faster and had much superior fire control -- it is generally accepted that the seemingly weaker Iowas would have defeated the 18.1" gun-armed Yamatos. Their larger shells did not have as much penetrating power as those of the Iowas. German Bismarck-class battleships, a concern while design were in progress, were built with 15" guns.

At the time the Iowas were being designed in 1936, while the Navy did not know the specifics of the German Bismarck-class or the Japanese Yamato-class, they were believed to be more powerful than any U.S. ship, the most powerful guns of which were the 16"-45 caliber MK 6 naval gun. Design alternatives included using an 18" gun, and also using the earlier 16"-45 guns. While a U.S. 18" design existed, the greater weight, if they were mounted in triple turrets, would reduce the speed of the ships to an unacceptable 22 knots. Dual turrets would have been a compromise, but no design existed. 16"-45s were thought to be less powerful than those of the enemy,

The best alternative, therefore, was three triple turrets of the MK 7.[1] 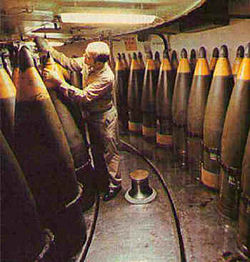 Shells in ammunition barbette; compare with size of sailor

Shells were stored in ammunition-handling rooms below the actual turret. 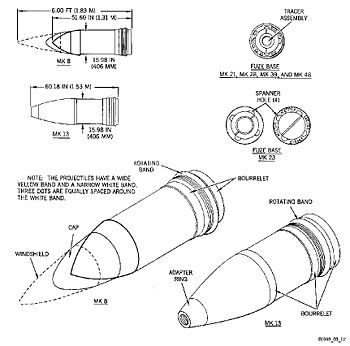 These weapons used "separate" ammunition, in which the projectile, a variable number of silk bags of propellant, and the primer were separately placed on a loading tray and rammed into the breech.

When the battleships were reactivated in the 1980s, other projectiles were designed but not implemented: 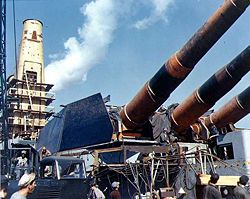 Iowas had three turrets, two forward and one aft, each with three 16" guns. The turrets were heavily armored structures, with the basic structure built of 0.75 in (1.9 cm) STS steel plates making up the gun house sides. Protective 9.5 in (24.1 cm) Class A armor plates were then bolted to it, and could be replaced if damaged in battle.

The turret roof was 0.75 in (1.9 cm) STS over which was 7.25 in (18.4 cm) of Class B armor plate. Again as with a tank, the top is the most vulnerable, a reasonable assumption for a battleship since opposing shells would have a relatively flat trajectory. Battleship armor was not designed for maximum protection against air-dropped bombs, and certainly not against modern top-attack precision-guided munitions. 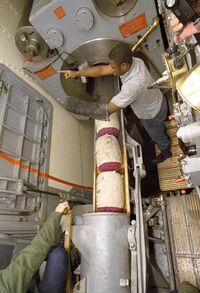 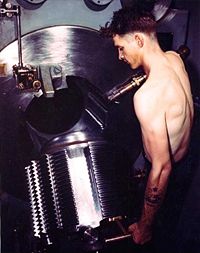 The guns were loaded separately, through the breech, and could be fired individually or in salvoes. Shells, of course, had to be lifted with mechanical hoists, placed on a loading tray, and then put into the gun with a power rammer.

After the shells were loaded, a variable number of propellant bags were placed on the loading tray and rammed, a primer inserted, and the breech was closed.

The gun could be fired by local control, or from the ship's fire control system. When built, the ship had both an optical and radar firing system. After the modernization in the 1980s, accuracy, already good for a battleship, improved dramatically with the addition of a radar that measured actual muzzle velocity of fired shells and allowed more precise calculation for each successive shot. In a 1987 test, "fifteen shells were fired from 34,000 yards (31,900 m), five from the right gun of each turret. The pattern size was 220 yards (200 m), 0.64% of the total range. 14 out of the 15 landed within 250 yards (230 m) of the center of the pattern and 8 were within 150 yards (140 m). Shell-to-shell dispersion was 123 yards (112 m), 0.36% of total range." 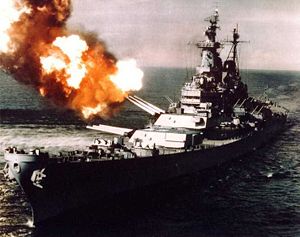 To give a sense of the power of the high-capacity round, the USS New Jersey (BB-62), the only battleship activated for the Vietnam War, routinely fired single rounds into the jungle, and creating an instan a helicopter landing zone 200 yards (180 m) in diameter, defoliated trees for 300 yards (270 m) beyond that.[2]

It should be noted that the combination of blast area and dispersion made this weapon impractical for close support of troops.

New Jersey also used her guns during the Lebanon crisis of 1983-1984. Concerns were raised about civilian damage, since there was no airborne or ground-based forward observer and the target positions were not precisely known. On 8 February 1984, she fired 300 shells at Druze and Syrian positions in the Bekka Valley east of Beirut. 30 hit a command post, killing the general commanding Syrian forces in Lebanon and several other senior officers.

On 19 April 1989, the center (#2) gun exploded in turret two of the Iowa, killing 47 crewmembers in one of the worst peacetime military accidents in the history of the U.S. Navy. An investigation by the Navy, assisted by the Federal Bureau of Investigation, concluded the explosion was deliberately caused by a crewman who wanted to commit suicide. From the presence of what the Navy called foreign substances, they concluded he had made an improvised explosive device that was triggered by the pressure of the rammer. 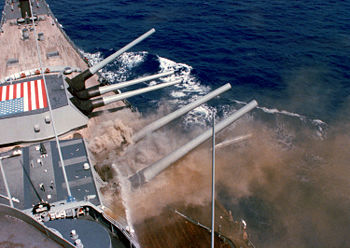 Subsequent studies, ordered by Congress, managed by the General Accountability Office, and conducted by Sandia National Laboratories, completely discredited this theory.[3] Sandia found that the suspected materials were normally present in firing residues, but strongly suspected that there had been an unexpected hypersensitivity to the ramming action under a certain set of conditions that existed at the time of the accident. Normally, there is air space between the base of the shell and the leading edge of the front powder bag: 17" with the five-bag load in use. It could be determined that there was no such gap, indicating an overram due to an unknown mechanical problem in the power rammer. Contributing factors may have been the mixture and position of propellant granules in the particular batch being used.