In most modern armies, the 120mm mortar is the standard heavy mortar for indirect fire support in infantry units. They are high-angle, short-barreled weapons fired from a bipod or tripod mount. Heavier mortars are still seen in artillery units, primarily those following Soviet/Russian design. 120mm mortars may be revolutionized by the advent of guided shells. 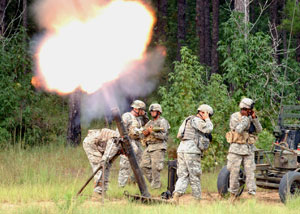 To fire the weapon, a shell is dropped into the muzzle, falling to hit a firing pin at the base. They may fire from a hand-emplaced mount, or from a mortar carrier vehicle. Representative performance of the U.S. M120 (ground mounted) or M121 (vehicle mounted) systems, is:

China builds the YW-381 mortar carrier on an YW-531 armored personnel carrier. Its mortar is fixed to the vehicle floor such that it cannot traverse (i.e., move in azimuth); to adjust fire, the vehicle has to move. Patria, of Finland, builds and exports mortar carriers as part of its AMV fighting vehicle family, and Thales Australia has a mortar carrier variant within its Bushmaster series.

Israel's Keshet Weapons System is not a full carrier, but rather a replacement for the M121 mortar in any M1064 mortar carrier. It gives the unit commander remote control over mortar fire. An article states delivery is being made to the U.S. Army as well as Israel.[1]

120mm mortars are most commonly assigned as platoons, typically with 4-6 gun tubes, at battalion level; they may also be at the company level in mounted units such as the Stryker Brigade Combat Team.

A U.S. Army requirement for the 120mm Accelerated Precision Mortar Initiative (APMI) set a minimum circular error probability of 10 meters and an objective of 5 meters, using Global Positioning System guidance. GPS guidance is preferred to laser guidance, so the weapon can engage targets behind obstacles, with no line of sight between the weapon and the target. Current laser rangefinders can easily read back GPS coordinates. [2]