The AN/ TRC-170 is a U.S. Army transportable radio that provides line-of-sight (LOS) and beyond-line-of site (BLOS, up to 100 miles) between locations containing components of the Joint Network Node (JNN) tactical communications system.[1] The JNN is a predecesor of the WIN-T Warfighter Information Network-Tactical. 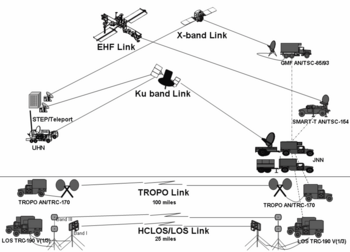 It is transportable, meaning it can be moved, by tactical vehicles and aircraft, among various points at which it must stop to oprate. For the BLOC function, it uses troposcatter, bouncing signals off the lower atmosphere rather than needing line of site; longer range is possible with a chain of TRC-170s, the intermediate one being relays.

It communicates with the JNN rather than being part of the JNN itself. The actual connection between an AN-TRC/170 and a nearby JNN runs over a diphase readio.