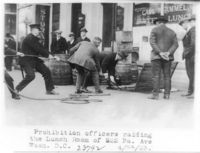 The United States enacted Prohibition of alcoholic beverages with the Eighteenth Amendment to the Constitution and Volstead Act in 1920 under President Woodrow Wilson. During the period, the production, transportation, and distribution of alcohol were banned. Prohibition was supported by the Temperance Movement, politicians such as William Jennings Bryan, and groups such as the Ku Klux Klan. However, during this period a black market of alcohol flourished and encouraged the growth of violent gangs including Al Capone's. In 1933, the Twenty First Amendment was ratified and Prohibition was formally repealed.

The brewing and consumption of alcoholic beverages have a long history in the United States tracing back to the early colonial era. However, in the late 19th century, the alcohol industry greatly expanded due to technological innovation, and establishments serving alcohol, called saloons, proliferated. The social problem of drunkenness soon rose, which caused a great amount of public concern. Organizations like Anti-Saloon League and Woman's Christian Temperance Union emerged to curb alcohol production and consumption. The movement against alcohol was known as the Temperance Movement. Important leaders of this movement include Frances E. Willard, Hannah W. Smith, Carry Nation and Wayne Wheeler.

The Prohibition Party was as a single-issue political party formed in 1869 advocating prohibition of alcohol, and still exists as a small party today.

The sentiment of temperance soon reached the branches of government of the United States. In 1917, the Congress proposed an amendment to the Constitution to prohibit alcohol. The amendment was promptly ratified by 45 states in 394 days, and only one state, Rhode Island, voted to reject the amendment.[1]

The Eighteenth Amendment authorized the Congress and states concurrent power to enforce prohibition. In 1919, Congressman Andrew Volstead wrote the National Prohibition Act, known as the Volstead Act, to provide federal enforcement prohibiting the manufacture, transportation, and sales of beverages containing 0.5% or more alcohol.[2]

The President of the United States at that time, Woodrow Wilson, however, was not an ardent supporter of Prohibition. He vetoed the Volstead Act, but his veto was overridden by Congress.[3]

It has been suggested that the 1913 Constitutional amendment authorizing a national income tax was one of the factors that encouraged politicians to appeal to the "Dry" sentiment, because the country no longer needed the revenues from alcohol taxation. [4]

In the early years of Prohibition, alcohol consumption did drop significantly. After that, however, it slowly increased, though never again reached pre-1920 levels. Organized crime emerged in every large city, supplying bootleg whiskey and operating "speakeasies," often with payoffs to local officials. The most notorious gangster to profit from Prohibition was Al Capone of Chicago; the Purple Gang of Detroit was also infamous for controlling the flow of liquor across the U.S. border. The illegal alcohol distributed during Prohibition also posed a danger to consumers due to its frequently compromised quality, while the government lost tax revenues.

Since ethyl alcohol is necessary in a wide range of industrial applications, the Federal government specified a number of formulas for denaturing alcohol—making it unpalatable or actively poisonous, but still usable in various processes. When illicit suppliers found ways to purify the approved mixtures, government regulators required industrial alcohol suppliers to use new and more toxic denaturing formulas.

In 1926, Charles Norris, the New York City Medical Examiner, charged that Prohibition enforcement was creating toxic formulas in order to establish a fear of drinking. He claimed, in short, that the government was deliberately poisoning the American population.

The government knows it is not stopping drinking by putting poison in alcohol... [Y]et it continues its poisoning processes, heedless of the fact that people determined to drink are daily absorbing that poison. Knowing this to be true, the United States government must be charged with the moral responsibility for the deaths that poisoned liquor causes, although it cannot be held legally responsible.[5]

In the 1930s, the national consensus in United States gradually shifted in favor of the repeal of Prohibition. In 1932, soon after the election of President Franklin Delano Roosevelt, the law was relaxed slightly to allow 3.2% of alcohol content in beer.[6] The Prohibition was formally abolished by the Twenty-first Amendment of the Constitution, proposed in 1933 and ratified by 38 states in 288 days, with only South Carolina voting against ratification.[1] This makes the Eighteenth Amendment the only repealed constitutional amendment in American history.[6]

The most famous American novel in which Prohibition figures is probably The Great Gatsby by F. Scott Fitzgerald. Written and published in the middle of the Prohibition era in 1925, its main character is Jay Gatsby, a bootlegger who has gained substantial wealth by selling illegal alcohol. Another relatively well-known novel is the very different 1969 Mile High by the political novelist Richard Condon, who describes how a single ruthless gangster, Edward Courance West, imposes Prohibition upon an unwary America solely to make himself the richest man in the world.