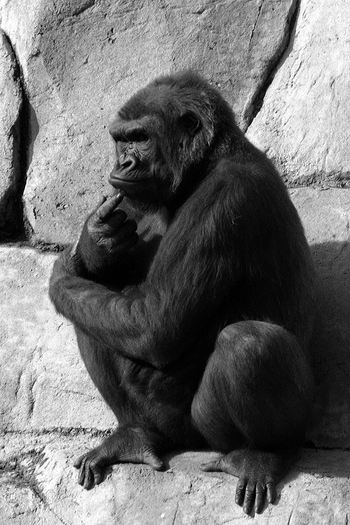 Human uniqueness is an attribute often used in discussions about the evolution of biological traits found in humans (Gazzaniga 2008). Though useful in terms of generating falsifiable hypotheses, the concept has frequently created misunderstandings, in particular since many claims of human uniqueness were not substantiated by an appropriately scoped search for the trait in question across a wider range of species. Furthermore, even in the presence of potential counter examples, judgements whether a given trait qualifies as uniquely human hinge upon precise definitions of the terms, which are often lacking. Some of the past and present candidate uniquenesses include art, brain size, brain folding, concealed ovulation, cooking, culture, emotions, gesture, humour, language, morality, music, the obstetric dilemma, domestication of plants and animals, fine-tuned respiration control, spirituality, theory of mind, tool use, and transpiration. Uniqueness can also be discussed within circumscribed taxonomic units: Humans may be unique amongst primates in terms of the ability for vocal learning but songbirds and some other non-primate animals also possess this trait. However, uniqueness in the ecological sense of occupying a specific ecological niche is inherent in most non-molecular definitions of the term species: koalas, for instance, are widely regarded as unique because of the very strong dependence of their diet upon the leaves of just one plant, eucalyptus.

Scientific comparison between apes and human

(CC) Image: Lorena Kaz in Herculano-Houzel, 2009
The human brain is not the largest. Brains of a human and of an African elephant are depicted here at the same scale (from Herculano-Houzel, 2009). Drawings by Lorena Kaz based on images freely available from the University of Wisconsin and Michigan State Comparative Mammalian Brain Collections (www.brainmuseum.org).

differences between modern humans and apes

Many physiologic differences between humans and apes are obvious, namely the upright walk, the bigger brain and smaller canines to mention only few. Also differences in behaviour are well knows so as language and the use of tools. Here should be stressed that all behavioural changes came along with physiological ones. The use of tools for instance would not have been possible without the alteration of an opposable thumb. Speech as well presupposes a change in the vocal tract. In the following there shall be described only few aspects of the differences between human and apes.

1) the sclera is without any pigmentation

3) the eye outline is elongated in the horizontal direction

Hiromi Kobayashi and Shiro Kohshima examined these points and suggested some hypothesis explaining the adaptive meaning of these particularities. therefore they measured several parameters (WHR: width/height ratio; SSI: exposed sclera size; scleral colour) of some apes and compared them to the values of humans from different sexes and races.

Single nucleotide polymorphism (SNP): mutation in one base

- responsible for 1.23% of differences between human and chimp genome

It seems that the non-coding part of the DNA, the regions where regulatory parts lie are twice as much under selection than the coding part.

Human uniqueness in language and music

A human characteristic is the broad use of language as a mean of communication. The variety of language within the human race might let us believe that language in this complexity is something unique in nature. To prove this thesis one has to define the complexity of language in a first step and on the basis of the features defined one has to test form of animal communication for these characteristics. A second question which belongs to the examination of language is the question whether music in its manner, use and appearance in human culture is a proof for human uniqueness. Here questions like: What is the difference between music and language? What distinguishes human songs from e.g. bird songs or whale songs? These are the two aspects to be studied in the following.

In 1960 Charles Hockett gave a definition for language. Therefore he considered 13 aspects (1.-13.) that characterize language. In a later paper (1968) he and Stuart Altmann added three further aspects (14.-16.) to define language.

1. Many animals communicate by use of the Vocal-auditory channel. Exceptions for this feature are bees which use dances or humans using sign language.

2. Language uses broadcast transmission. Messages are transmitted through space and can be perceived by several animals. It allows communication between animals that cannot see each other.

3. Another characteristic for language is its rapid fading. In contrast to e.g. scents deposited to mark territories, language (unless written language) does not persist in the environment.

4. Interchangeabilitydescribes the fact that senders and receivers can be interchanged. Whereas in the case of mating calls often only members of one sex utter calls.

5. In language exists a 'total feedback. That means that the sender receives his own calls.

6. Language underlies a specialization. Its sole aim is communication and it has no other e.g. physiological function.

7. A further feature of language is semanticity. The single signs of a language are associated with and elements of the world around.

8. Except of some onomatopoetic elements, language exhibits arbitrariness. Normally signals are not alike the elements they denote.

9. Language features discreteness: signal are constructed by smaller parts each one containing a message. In human language phrases consist of words which can be interchanged to other phrases with different meanings.

10. There is no genetic reason for language - it is learned and not instinctive. Therefore there is a traditional transmission of language.

11. Language can be used to communicate about things or events that take place far away or at a different time. Thus it shows the characteristic of displacement.

12. A further feature of language is its productivity. It is possible to create new messages by the existing elements of a language.

13. The aspect of duality of pattern is related to the discreteness of language. There are at least two levels of structure. Meaningless units like sounds are combined to larger meaningful element (e.g. words) that might even form more complex elements (e.g. phrases).

14. Prevarication: by means of language it is possible to mislead perceivers by uttering false signals.

15. Language can be used to talk about language. Another characteristic of language is therefore reflexiveness.

16. As a implication of the traditional transmission of language one can find as a further feature of language the learnability. It denotes the aspect that a language can be learned.

Regarding the first 13 characteristics that were proposed, human uniqueness lies in the fact that human language shows all the single characteristics (except for the vocal-auditory feature concerning sign language). Nonetheless all features proposed can also be found in animal language. The characteristic of displacement for example can be found in dances, bees use to communicate about food sources or new hive locations displaced in space which other bees will use in their future behaviour (displacement in time). Other characteristics, which are considered to bee unique for humans, are also discussed. One of them is the "structure dependence" found in human language. It describes the fact that e.g. parenthetical phrases exist and are understood because of the position and grammar of the parenthesis.

ex: The people [who called and wanted to rent your house when you go away next year] are from California.

Here the parenthesis is clear because of the structure as well as the grammar, for the verb "are" belongs to "people" and differs in time from the verbs "called" and "wanted".

Another supplementary feature that is supposed to be unique for human language is "recursion". It can be made clear by an example:

That feature should be unique in human language, although it is hard to test for several reasons:

(iii) the recursion must in theory be indefinitely, which is hard to test because of memory limitations.

These characteristics of language also show the differences between innate calls and language. It is obvious that innate calls are not as complex as language is. Additionally they are not generative and cannot be learned.

Comparison of language and music

Now that language is defined by several features, these characteristics can also be used to define music and to distinguish it from language and especially from innate calls respectively. Considering "physical" aspects language, innate calls and music have things in common like the broadcast transmission, the rapid fading and the total feedback. But one can clear differentiate music from innate calls by complexity, productivity and discreteness to name only some features. In contrast one has to take a deeper look on the differences between music and language to get aware of the nature of music. To begin with the similarities between language and music, one can start with the complexity and generativity of music. Like in language one can use number of single elements to create a new piece of music which can be very complex. Thus music and language share also the characteristic of discreteness. Like in language music is also transposable i.e. melodies do not change performed from a higher starting note, since melodies are characterized by the relationship between notes. Music and language are also both transmitted culturally, where music appears in contrast to language often in a performative context. Humans apply songs often in specific social context e.g. rituals. One fundamental difference between language and music is the basis they are starting from. Music is made up by discrete pitches (notes), language does not have a sound composed by discrete pitches. Additionally music has a beat and is therefore in contrast to language isochronic.

Comparison of human and animal music

First of all one has to define an animal song e.g. a birdsong. In the following an animal song will mean a complex, learned vocalization. The focus will be on birdsongs although other forms of animal music like whale songs and even instrumental music like the song of a woodpecker exist. Talking about human music singing and playing instruments is associated with pleasure and culture and not necessarily with an instinctive behaviour. So in a first step one can wonder why we find music in animals and about its origin. Knowing that the common ancestors of birds and humans, the reptiles, did not sing, music must be an analogous and no homologous attribute of humans and birds. The difference between birdsong and human songs lies in its function. Although one could observe young male songbirds singing alone, birdsongs serve communication. Also most animal races singing is primarily a male behaviour. In contrast human singing is not gender specific and is performed for several reasons but not in principally for communication.