Difference between revisions of "Fractal" 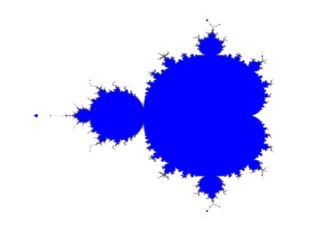 In common parlance, Fractal, from the Latin fractus,[1] meaning "broken", designates a highly irregular or "infinitely complex" shape that appears detailed and self-similar in some sense at all scales of magnification. Mathematicians avoid giving the strict definition,[2] and use the term fractal to refer to a geometric object that has (most of) the following features

Not all self-similar objects are fractals — for example, the real line (a straight Euclidean line) is formally self-similar but fails to have other fractal characteristics.

Objects that are now described as fractals were discovered and described centuries ago. Ethnomathematics like Ron Eglash's African Fractals (ISBN 0-8135-2613-2) describes pervasive fractal geometry in indigeneous African craft work. In 1525, the German Artist Albrecht Dürer published The Painter's Manual, in which one section is on "Tile Patterns formed by Pentagons." The Dürer's Pentagon largely resembled the Sierpinski carpet, but based on pentagons instead of squares.

The idea of "recursive self-similarity" was originally developed by the philosopher Leibniz and he even worked out many of the details. In 1872, Karl Weierstrass found an example of a function with the nonintuitive property that it is everywhere continuous but nowhere differentiable — the graph of this function would now be called a fractal. In 1904, Helge von Koch, dissatisfied with Weierstrass's very abstract and analytic definition, gave a more geometric definition of a similar function, which is now called the Koch snowflake. In 1915, Waclaw Sierpinski constructed his triangle and, one year later, his carpet. Actually, these fractals were described as curves, which is hard to realize with the well known modern constructions. The idea of self-similar curves was taken further by Paul Pierre Lévy who, in his 1938 paper Plane or Space Curves and Surfaces Consisting of Parts Similar to the Whole, described a new fractal curve, the Lévy C curve.

Georg Cantor gave examples of subsets of the real line with unusual properties — these Cantor sets are also now recognised as fractals. Iterated functions in the complex plane had been investigated in the late 19th and early 20th centuries by Henri Poincaré, Felix Klein, Pierre Fatou, and Gaston Julia. However, without the aid of modern computer graphics, they lacked the means to visualize the beauty of many of the objects that they had discovered.

In the 1960s, Benoît Mandelbrot started investigating self-similarity in papers such as How Long Is the Coast of Britain? Statistical Self-Similarity and Fractional Dimension. This built on earlier work by Lewis Fry Richardson. In 1975, Mandelbrot coined the word fractal to denote an object whose Hausdorff-Besicovitch dimension is greater than its topological dimension. He illustrated this mathematical definition with striking computer-constructed visualizations. These images captured the popular imagination; many of them were based on recursion, leading to the popular meaning of the term "fractal".

File:Julia set (indigo).png
A Julia set, a fractal related to the Mandelbrot set

A relatively simple class of examples is given by the Cantor sets, Sierpinski triangle and carpet, Menger sponge, dragon curve, space-filling curve, Koch curve. Additional examples of fractals include the Lyapunov fractal and the limit sets of Kleinian groups. Fractals can be deterministic (all the above) or stochastic (that is, non-deterministic). For example the trajectories of the Brownian motion in the plane have Hausdorff dimension 2.

Chaotic dynamical systems are sometimes associated with fractals. Objects in the phase space of a dynamical system can be fractals (see attractor). Objects in the parameter space for a family of systems may be fractal as well. An interesting example is the Mandelbrot set. This set contains whole discs, so it has the Hausdorff dimension equal to its topological dimension of 2 —but what is truly surprising is that the boundary of the Mandelbrot set also has the Hausdorff dimension of 2 (while the topological dimension of 1), a result proved by M. Shishikura in 1991. A closely related fractal is the Julia set.

The following analysis of the Koch Snowflake suggests how self-similarity can be used to analyze fractal properties.

The total length of a number, N, of small steps, L, is the product NL. Applied to the boundary of the Koch snowflake this gives a boundless length as L approaches zero. But this distinction is not satisfactory, as different Koch snowflakes do have different sizes. A solution is to measure, not in meter, m, nor in square meter, m², but in some other power of a meter, mx. Now 4N(L/3)x = NLx, because a three times shorter steplength requires four times as many steps, as is seen from the figure. Solving that equation gives x = (log 4)/(log 3) ≈ 1.26186. So the unit of measurement of the boundary of the Koch snowflake is approximately m1.26186.

More generally, suppose that a fractal consists of N identical parts that are similar to the entire fractal with the scale factor of L and that the intersection between part is of the Lebesgue measure 0. Then the Hausdorff dimension of the fractal is

. For example, the Hausdorf dimension of

and so on. Even more generally one may assume that each of N parts is similar to the fractal with a different scale factor

. Then the Hausdorff dimension can be calculated by solving the following equation in the variable s:

Trees and ferns are fractal in nature and can be modeled on a computer by using a recursive algorithm. This recursive nature is obvious in these examples — a branch from a tree or a frond from a fern is a miniature replica of the whole: not identical, but similar in nature.

The surface of a mountain can be modeled on a computer by using a fractal: Start with a triangle in 3D space and connect the central points of each side by line segments, resulting in four triangles. The central points are then randomly moved up or down, within a defined range. The procedure is repeated, decreasing at each iteration the range by half. The recursive nature of the algorithm guarantees that the whole is statistically similar to each detail.

As described above, random fractals can be used to describe many highly irregular real-world objects. Other applications [1] of fractals include:

File:Fractal mountain.gif
A fractal that models the surface of a mountain (animation)