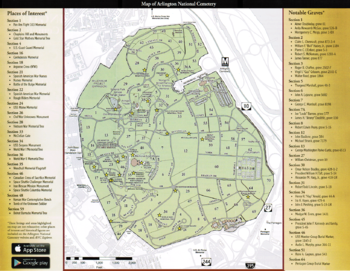 Arlington National Cemetery is an American military cemetery and National Park located in Arlington, Virginia, which is houses the graves of over 250,000 servicemen and women. The 200 acre cemetery is well-known for the military precision with which the graves of thousands of ordinary military personnel are laid out, but visitors are often surprised to find that Arlington, as it is known, is also the final resting place of a diverse group of ex-servicepersons famed in other arenas, such as actors Audie Murphy (interestingly, the most highly-decorated World War II veteran) and Lee Marvin, writer Dashiell Hammett, bandleader Glenn Miller and boxer Joe Louis. Because of its historical significance and its solemn, verdant and serene atmosphere, Arlington is a source of national pride which attracts many thousands of visitors per year.