This article discusses the history of processors designed over the decades since the first electronic computers were built. Early computers, such as the ENIAC, had to be physically rewired in order to perform different tasks. These machines are often referred to as "fixed-program computers," since they had to be physically reconfigured in order to run a different program. Since the term "CPU" is generally defined as a software (computer program) execution device, the earliest devices that could rightly be called CPUs came with the advent of the stored-program computer. 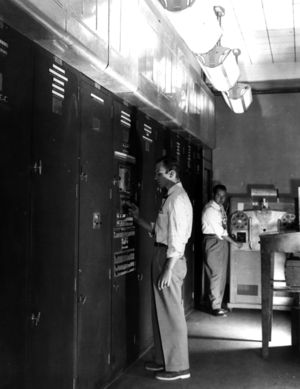 EDVAC, one of the first electronic stored program computers.

The idea of a stored-program computer was already present during ENIAC's design, but was initially omitted so the machine could be finished sooner. On June 30, 1945, before ENIAC was even completed, mathematician John von Neumann distributed the paper entitled First Draft of a Report on the EDVAC (NOTE: ref needed). It outlined the design of a stored-program computer that would eventually be completed in August 1949 (von Neumann 1945). EDVAC was designed to perform a certain number of instructions (or operations) of various types. These instructions could be combined to create useful programs for the EDVAC to run. Significantly, the programs written for EDVAC were stored in high-speed computer memory rather than specified by the physical wiring of the computer. This overcame a severe limitation of ENIAC, which was the large amount of time and effort it took to reconfigure the computer to perform a new task. With von Neumann's design, the program, or software, that EDVAC ran could be changed simply by changing the contents of the computer's memory.[1]

While von Neumann is most often credited with the design of the stored-program computer because of his design of EDVAC, others before him such as Konrad Zuse had suggested similar ideas. Additionally, the so-called Harvard architecture of the Harvard Mark I, which was completed before EDVAC, also utilized a stored-program design using punched paper tape rather than electronic memory. The key difference between the von Neumann and Harvard architectures is that the latter separates the storage and treatment of CPU instructions and data, while the former uses the same memory space for both. Most modern CPUs are primarily von Neumann in design, but elements of the Harvard architecture are commonly seen as well.

Being digital devices, all CPUs deal with discrete states and therefore require some kind of switching elements to differentiate between and change these states. Prior to commercial acceptance of the transistor, electromechanical relays and vacuum tubes (thermionic valves) were commonly used as switching elements. Although these had distinct speed advantages over earlier, purely mechanical designs, they were unreliable for various reasons. For example, building direct current sequential logic circuits out of relays requires additional hardware to cope with the problem of contact bounce in the switches. While vacuum tubes do not suffer from contact bounce, they must heat up before becoming fully operational and eventually stop functioning altogether.[2] Usually, when a tube failed, the CPU would have to be diagnosed to locate the failing component so it could be replaced. Therefore, early electronic (vacuum tube based) computers were generally faster but less reliable than electromechanical (relay based) computers. Tube computers like EDVAC tended to average eight hours between failures, whereas relay computers like the (slower, but earlier) Harvard Mark I failed very rarely (Weik 1961:238). In the end, tube based CPUs became dominant because the significant speed advantages afforded generally outweighed the reliability problems. Most of these early synchronous CPUs ran at low clock rates compared to modern microelectronic designs (see below for a discussion of clock rate). Clock signal frequencies ranging from 100 kHz to 4 MHz were very common at this time, limited largely by the speed of the switching devices they were built with. 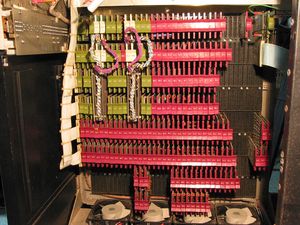 The design complexity of CPUs increased as various technologies facilitated building smaller and more reliable electronic devices. The first such improvement came with the advent of the transistor. Transistorized CPUs during the 1950s and 1960s no longer had to be built out of bulky, unreliable, and fragile switching elements like vacuum tubes and electromechanical relays. With this improvement more complex and reliable CPUs were built onto one or several printed circuit boards containing discrete (individual) components.

During this period, a method of manufacturing many transistors in a compact space gained popularity. The integrated circuit (IC) allowed a large number of transistors to be manufactured on a single semiconductor-based die, or "chip." At first only very basic non-specialized digital circuits such as NOR gates were miniaturized into ICs. CPUs based upon these "building block" ICs are generally referred to as "small-scale integration" (SSI) devices. SSI ICs, such as the ones used in the Apollo guidance computer, usually contained transistor counts numbering in multiples of ten. To build an entire CPU out of SSI ICs required thousands of individual chips, but still consumed much less space and power than earlier discrete transistor designs. As microelectronic technology advanced, an increasing number of transistors were placed on ICs, thus decreasing the quantity of individual ICs needed for a complete CPU. MSI and LSI (medium- and large-scale integration) ICs increased transistor counts to hundreds, then thousands.

In 1964 IBM introduced its System/360 computer architecture, which was used in a series of computers that could run the same programs with different speed and performance. This was significant at a time when most electronic computers were incompatible with one another, even those made by the same manufacturer. To facilitate this improvement, IBM utilized the concept of a microprogram (often called "microcode"), which still sees widespread usage in modern CPUs (Amdahl et al. 1964). The System/360 architecture was so popular that it dominated the mainframe computer market for the next few decades and left a legacy that is still continued by similar modern computers like the IBM zSeries. In the same year (1964), Digital Equipment Corporation (DEC) introduced another influential computer aimed at the scientific and research markets, the PDP-8. DEC would later introduce the extremely popular PDP-11 line that originally was built with SSI ICs but was eventually implemented with LSI components once these became practical. In stark contrast with its SSI and MSI predecessors, the first LSI implementation of the PDP-11 contained a CPU composed of only four LSI integrated circuits (Digital Equipment Corporation 1975).

Transistor-based computers had several distinct advantages over their predecessors. Aside from facilitating increased reliability and lower power consumption, transistors also allowed CPUs to operate at much higher speeds because of the short switching time of a transistor in comparison to a tube or relay. Thanks to both the increased reliability as well as the dramatically increased speed of the switching elements (which were almost exclusively transistors by this time), CPU clock rates in the tens of megahertz were obtained during this period. Additionally, while discrete transistor and IC CPUs were in heavy usage, new high-performance designs like SIMD (Single Instruction Multiple Data) vector processors began to appear. These early experimental designs later gave rise to the era of specialized supercomputers like those made by Cray Inc.

The introduction of the microprocessor in the 1970s significantly affected the design and implementation of CPUs. Since the introduction of the first microprocessor (the Intel 4004) in 1970 and the first widely used microprocessor (the Intel 8080) in 1974, this class of CPUs has almost completely overtaken all other central processing unit implementation methods. Mainframe and minicomputer manufacturers of the time launched proprietary IC development programs to upgrade their older computer architectures, and eventually produced instruction set compatible microprocessors that were backward-compatible with their older hardware and software. Combined with the advent and eventual vast success of the now ubiquitous personal computer, the term "CPU" is now applied almost exclusively to microprocessors.

Previous generations of CPUs were implemented as discrete components and numerous small integrated circuits (ICs) on one or more circuit boards. Microprocessors, on the other hand, are CPUs manufactured on a very small number of ICs; usually just one. The overall smaller CPU size as a result of being implemented on a single die means faster switching time because of physical factors like decreased gate parasitic capacitance. This has allowed synchronous microprocessors to have clock rates ranging from tens of megahertz to several gigahertz. Additionally, as the ability to construct exceedingly small transistors on an IC has increased, the complexity and number of transistors in a single CPU has increased dramatically. This widely observed trend is described by Moore's law, which has proven to be a fairly accurate predictor of the growth of CPU (and other IC) complexity to date.

While the complexity, size, construction, and general form of CPUs have changed drastically over the past sixty years, it is notable that the basic design and function has not changed much at all. Almost all common CPUs today can be very accurately described as von Neumann stored-program machines.

As the aforementioned Moore's law continues to hold true, concerns have arisen about the limits of integrated circuit transistor technology. Extreme miniaturization of electronic gates is causing the effects of phenomena like electromigration and subthreshold leakage to become much more significant. These newer concerns are among the many factors causing researchers to investigate new methods of computing such as the quantum computer, as well as to expand the usage of parallelism and other methods that extend the usefulness of the classical von Neumann model.