This is a draft in User space, not yet ready to go to Citizendium's main space, and not meant to be cited. The {{subpages}} template is designed to be used within article clusters and their related pages.
It will not function on User pages.

Created in 1931 by the Commission Internationale De L’eclairage (CIE), the CIE color space and 2o standard observer is one of the most accurate ways to represent color. While modifications were made thereafter, namely the CIE 1964 10o standard observer, the 1931 model remains the most widely used. Derived from two studies done by William David Wright and John Guild in the late 1920’s, the CIE was able to develop the CIE XYZ color space as well as the 2o standard observer. Because the CIE standard observer and tristimulus values are the basis for color representation, it is used to derive coordinates in other color spaces, such as sRGB and RGB.

Light observed through the naked eye can always be broken down into a ratio of three colors based on the sensitivities of the color receptors, or cones, in the human eye. These three colors are red (~700 nanometers), green (~546.1 nanometers) and blue (~435.8 nanometers). These values are represented in the CIE 1931 color space and are denoted by the variables X, Y, and Z, which are shown in the graph on the right. 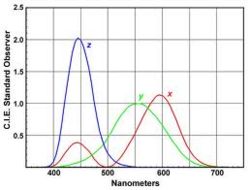 CIE 1931 Tristimulus Values
The cones in the human eye respond differently based upon the angle at which an object is viewed. Consequently, the CIE developed the 2o standard observer in order to eliminate this variable. The 2o standard was developed based on the experiments conducted by Wright and Guild. Their experiments used human subjects who observed color while looking through a hole, which provided them with a 2o field of view. Because it was believed that the cones in the eye lied within a 2o arc of the fovea, the 2o standard observer was created.

are the CIE 1931 (2o) color matching functions and k is a normalizing factor used to represent reflected colors described in the following equation:

What the eye views depends greatly upon the object’s illumination. An object under a certain illumination will appear differently under another illuminant. This is what is known as metamerism. A dense incandescent substance radiates energy based on its temperature. As a result, if the temperature of the material changes, so do its spectral characteristics. Blackbody radiators each have their own Spectral Power Density (SPD), which is represented by Planck’s law:


In terms of the CIE standard observer, there are several “standard” illuminants. For example, CIE Illuminant A is intended to represent tungsten light. Its SPD is calculated from Planck’s law using a color temperature of 2856K.

By normalizing the tristimulus values obtained from the color matching functions, one can find the color’s chromaticity coordinates x, y, and z: 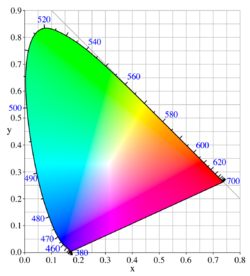 This color space was designed to use the variable Y to represent the luminance, which is equal in value to the Y tristimulus value. The x and y can be used to plot any measured color on the CIE 1931 chromaticity diagram shown on the right. This diagram represents all chromaticities visible to the human eye. This model is considered more accurate than other color representations such as Munsell because it includes illuminant’s SPDs.

Two of the most commonly used color spaces in today’s world are the RGB and sRGB system. The RGB system is used widely in video technology, such as TVs, photography, scanners, projectors, and computer screens. The RGB space has several derivates such as sRGB and Adobe RGB.

The conversion between tristimulus values X, Y, and Z and the RGB color space is expressed linearly via the following matrix: