From Citizendium, the Citizens' Compendium
(Redirected from Thylakoids)
Jump to: navigation, search 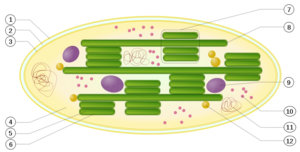 Inside plant cells and other eukaryotic cells that perform photosynthesis, tiny, bacteria-sized organelles, called chloroplasts, contain, within the inner membrane of their dual membrane structure, an extensive system of single-membrane-bound flattened sacs called thylakoids, their interior spaces (lumens) interconnected, their membranes housing the pigment molecules that absorb the energy of photons of particular frequencies emitted by the sun, an event that initiates the physico-chemical sequence of steps culminating in the products of photosynthesis.[2] A semifluid matrix within the chloroplasts, called the stroma, bathes the thylakoids. The flattened thylakoid sacs consist of clustered stacks, called grana, their lumens interconnected by extensions, called 'stromal thylakoids', or lamellae.[3] [See accompanying illustration at right.]

The illustration does not due justice to the complexity of the thylakoid structure:[4] [3]

Grana consist of cylindrical stacks of ~10 to 20 tightly appressed thylakoids of 300 to 600 nm in diameter that are interconnected by single, unstacked, stroma thylakoids….the stroma [thylakoid] membranes are wound around the granum in the form of multiple right-handed helices, in which each granum thylakoid is connected to an average of eight stroma thylakoids…The cylindrical granum pillar of stacked membranes is surrounded by multiple helices of stroma thylakoids that are interconnected via slits or junctions at the margins of the grana, which ensures the contiguity of the thylakoid membranes and their lumenal aqueous phases across the entire granum-stroma network. [3] 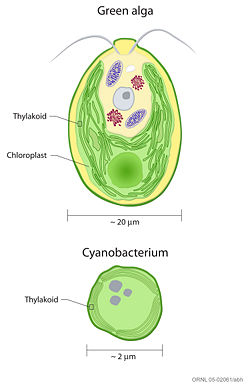 Prokaryotic cells that carry out photosynthesis (e.g., cyanobacteria) do not contain chloroplasts; their thylakoid membranes reside within the cytoplasm of the cells, as shown in the accompanying figure at left.[5] [6]

In general terms, the photosynthetic process enables the energy of photons radiated from the sun to energize electrons in special photon-absorbing pigment molecules embedded in the thylakoid membranes, electrons ultimately supplied by the splitting of water molecules in a reaction that also converts water's oxygen atoms to molecular oxygen for release into the atmosphere and for use by the plant.

The molecular clusters in the grana and stromal thylakoid membranes transfer the energy of the energized electrons to energy-carrier molecules—ATP and NADPH—the energy therein used in metabolic reactions in the stroma to synthesize organic compounds using the inorganic carbon compound, carbon dioxide, as the carbon source starting material.[7]

In generating ATP, molecules in the thylakoids' electron transfer chains pump protons from the stroma to the thylakoid lumen, making the lumen more acidic. The higher lumen concentration of protons compared to that in the stroma leads to protons passing back into the stroma through a pathway in the enzyme, ATP synthase, a complex molecule in the thylakoid membrane that utilizes the energy inherent in the proton concentration gradient to synthesize ATP, converting ADP to ATP. ATP is a key energy source for synthesizing organic compounds from carbon dioxide in the stroma, a phase of the photosynthetic process called the Calvin cycle, which does not directly require light-energy, hence referred to as light-independent reactions.[7]

In generating NADPH from NADP, a redox reaction, NADPH becomes an energy-rich electron-carrier that supplies electrons for reducing carbon dioxide to carbohydrates as part of the Calvin cycle in the stroma. Thus the light-dependent photosynthetic reactions in the thylakoid membranes supply both the ATP and NADPH, energy and electrons, for stromal light-independent synthesis of carbohydrate.

The Internet has numerous images of thylakoids of particular instructive value. You will find links to those images on the Gallery subpage.