Shigella dysenteriae are Gram-negative, rod (bacillus) shaped, non-motile, non-spore-forming, facultative anaerobic bacteria that are not capsualted.[1] The bacteria are able to survive contaminated environments as well as the acidity of the human gastro-intestinal tract. Shigella dysenteriae are important because the can pose a public health threat, especially in underdeveloped countries. The accumulation of bacterial Shigella dysenteriae in a host causes a condition known as shigellosis. If left untreated in a host, the infection can be lethal.

Shigella dysenteriae were discovered in 1896 by the Japanese microbiologist Kiyoshi Shiga, after whom the genus was named. It was the first in the species to be discovered; there are now three others that share the genus: boydii, flexneri, and sonnei.[1]

Shigella dysenteriae has the smallest genome of the genus Shigella, which contains three other species. Its genome consists of a single circular chromosome and 4,369,232 base pairs.[2] It carries an invasion-associated plasmid which contains genes that code for the invasion of the epithelial cells and the production of Shiga toxin.[3] The Shiga toxin is a potent A-B type toxin with 1-A and 5-B subunits. B subunits bind to the cell and inject the A-subunit. By cleaving a specific adenine residue from the 28S ribosomal RNA in the 60S ribosome, the toxin inhibits protein synthesis, causing cell death.[1] 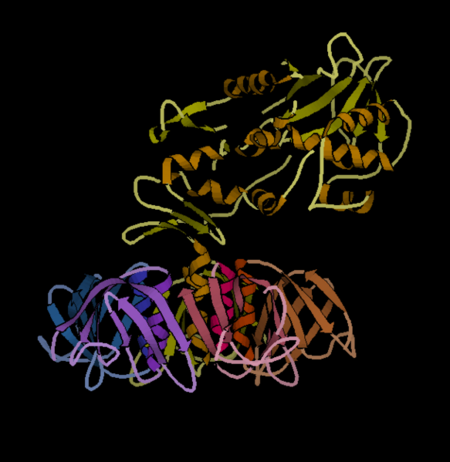 Shiga toxin attacks the surface of blood vessels inside the gastro-intestinal tract. The beta subunits of the Shiga toxin bind to the host cell. The alpha subunits are then injected into the cell, and these subunits work inhibit protein synthesis by deactivating the ribosomes. This eventually leads to the death of the cell, and hemmorrhage of the surface whcich it binds to. This accounts for the blood seen in the diarrhea. The toxin not only affect the digestive tract, but it attacks major structures associated with the kidneys function. The attack on these structures leads to kidney failure and the development of Hemolytic Uremic Syndrome.[1]

Shigella dysenteriae interacts with humans, other primates, and flies. Humans act as hosts for infection, which leads to bacillary dysentery. Flies can act as means of transportation for the bacteria, spreading it to other hosts.

Shigella dysenteriae causes shigellosis (bacillary dysentery) in humans. It's also known to cause dysentery in other primates, but not in other animals. The infection can be caused by as few as ten bacterial cells, whereas other bacteria requires millions of cells for infection. This is due to the potency of the Shiga toxin. The infection begins with the bacteria entering the gastro-intestinal tract attaching itself to the intestinal wall. The bacteria invades the host cell injecting its Shiga toxin inside. This results in the degeneration of of the surface, causing blood leakage. Attachment of the Shiga toxin to the surface cells of the intestine prevents these cells from absorbing nutrients and water, which may lead to dehydration.[1]

Common symptoms of bacillary dysentery include acute bloody diarrhea, abdominal pains and cramps, fever, vomiting, dehydration, and tenesmus. A more severe infection can lead to more severe complications such as hemolytic uremic syndrome, which develops in 5 to 10 percent of patients. Mortality from hemolytic uremic syndrome approaches 5 percent, but up to 30 percent of patients who survive have chronic renal disease.[4] Patients, in more severe cases, can also suffer from inflammatory colitis.

Shigellosis can resolve on its own in several days, but in smaller children and people with weak immune systems, the infection can be more severe, resulting in hospitalization or death. Once a person has become infected, they are not likely to get infected with the particular strain again, due to the bodies' ability to produce antibodies. However, they can be reinfected by other strains of Shigella dysenteriae. Treatment includes the application of antibiotics. The antibiotics will kill the bacteria inside the gastrointestinal tract, shortening its lifespan and therefore shortening the course of the infection. Some anitmicrobial agents used to treat bacillary desentery include ciprofloxacin, ampicillin, trimethoprim-sulfamethoaxzole, and nalidixic acid. Other medication is used to treat other effect of the dysentery such as dehydration.

It has been found that Shigella dysenteriae's virulence is regulated by RyhB suppression.[5] The virulence genes that are being repressed by RyhB include genes which code for the secretion apparatus, its effectors and its chaperones. It was found that the virulence suppression occurs by the RyhB dependent repression of the transcriptional activator VirB which lead a reduction in expression of genes within the VirB region. Several tests were conducted such as microarray analysis, secreted protein analysis and polymerase chain reaction. It was concluded that RyhB represses the expression of several genes within VirB region, which in turn suppresses plaque formation by inhibiting the ability of Shigella dysenteriae to invade eukaryotic cells. There is a direct relationship between plaque formation and RyhB expression. It was then further determined that since RyhB is iron-responsive, iron therefore contributes to the regulation of virulence within Shigella dysenteriae.

There has been one case of Shigellosis discovered in which the patient suffered from septic shock and convulsions, which is an unusual side effect of the infection.[6] The patient had the usual symptoms of bloody diarhhea, tenesmus and fever. The patient also suffered from abnormal body movement and did not respond to the initial treatments with trimethoprim-sulphamethoxazole, which suggests that the particular strain of the infection was resistant to the antibiotic. Various tests, such as blood films, stool microscopy, stool culture and cerebrospinal fluid cultures, were conducted to determine the cause of this case of Shigellosis, but all came up negative. Finally, a test was done on the blood culture and after a few days colony growth was observed and Shigella dysenteriae was isolated. Sensitivity tests were then conducted on the bacteria. It was determined that the bacteria was resistant to chloramphenicol, TMP-SMX, ampicillin, and tetracycline, but sensitive to ciprofloxacin and gentamycin. The patient was given medication for the septic shock, which subsided soon afterward. However, the patient died soon after. It was thought that the septic shock was a result of the build-up of Shiga toxin produced by the bacteria. It was concluded that when not appropriately and promptly treated, these infections can lead to more serious and lethal side effects.